Occupy the Future: Why We Need a Politics and Culture of Science 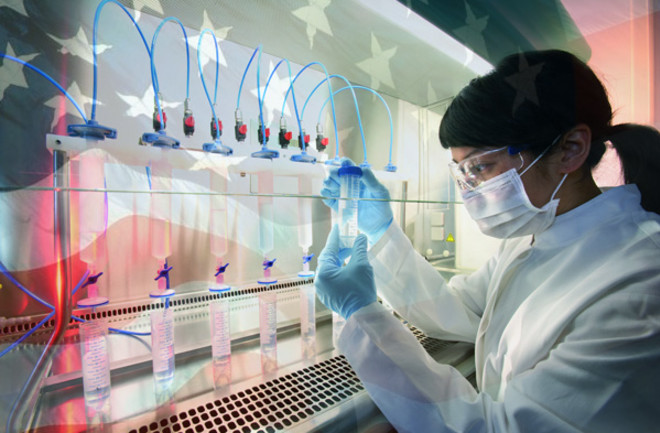 The Future has stalled. Sure, some snazzy new gadgets came out this year, but all the Next Big Things are still just over the horizon. Neal Stephenson and Peter Thiel both have depressing articles trying to pin down the culprit for our technological stagnation. They both take some shots at government, at education, and at how technological progress has become self-defeating. One passage from Stephenson crystallized the argument:

Innovation can’t happen without accepting the risk that it might fail. The vast and radical innovations of the mid-20th century took place in a world that, in retrospect, looks insanely dangerous and unstable. Possible outcomes that the modern mind identifies as serious risks might not have been taken seriously—supposing they were noticed at all—by people habituated to the Depression, the World Wars, and the Cold War, in times when seat belts, antibiotics, and many vaccines did not exist. Competition between the Western democracies and the communist powers obliged the former to push their scientists and engineers to the limits of what they could imagine and supplied a sort of safety net in the event that their initial efforts did not pay off. A grizzled NASA veteran once told me that the Apollo moon landings were communism’s greatest achievement.

We’ve stopped innovating in big, world-changing ways. Clean energy, health care, and space travel are all roughly where they were in the ‘70s. So what's missing? Why is it not just the West, but seemingly the entire world has suddenly shuddered to a crawl in terms of technological progress? Oddly enough, the beginnings of an answer to our innovation woes can be found in another cultural throwback: the massive protests that are Occupy Wall Street. Occupy Wall Street is not a coherent movement. Those who make up its ranks, however, can be widely described as "liberals" and "progressives." Despite what you may have heard, those are not pejorative terms. But what should rank-and-file liberals, aka Democrats, think about the Occupy Wall Street protestors? In "Protests and Power: Should Liberals Support Occupy Wall Street?”after outlining the oddities and incongruencies of the protests, the editors at The New Republic conclude:

In the face of the current challenge from Tea Party conservatism, it is more important than ever that liberals make a compelling case for our vision of America. But we will not make this case stronger by allying with a movement that is out of sync with our values. And so, on the question of how liberals should feel about Occupy Wall Street, count us as deeply skeptical.

The question is a difficult one: by definition, progressives are champions of the future. Silicon Valley, the innovative epicenter of the United States, has long held liberal and libertarian views. That's all fine and dandy, but what does a largely directionless protest against corporatism have to do with resuscitating the Future? Innovators, liberals, and protestors are all looking for direction. The solution for all three lies in the same place: science. (Say it in the Bill Nye voice. SCIENCE!) Be it directly or indirectly, these three articles by the editors of The New Republic, Thiel, and Stephenson argue that cultural progress had taken the place of technological progress, but in a limited and, ultimately, distracting way. The illuminating passage comes near the end of Thiel’s critique of the status quo:

Men reached the moon in July 1969, and Woodstock began three weeks later. With the benefit of hindsight, we can see that this was when the hippies took over the country, and when the true cultural war over Progress was lost . . .Today’s aged hippies no longer understand that there is a difference between the election of a black president and the creation of cheap solar energy; in their minds, the movement towards greater civil rights parallels general progress everywhere. Because of these ideological conflations and commitments, the 1960s Progressive Left cannot ask whether things actually might be getting worse. I wonder whether the endless fake cultural wars around identity politics are the main reason we have been able to ignore the tech slowdown for so long.

Thiel’s Cartman-esque disdain for hippies aside, he makes an important point: cultural victories have become problematic in that we are unable to connect them to economic and technological progress. Thiel – along with Jon Huntsman and a few folks over at Reason Magazine – is among the few conservatives who aren’t explicitly and proudly anti-science. His critique of liberalism is not that it is an affront to religion or tradition, but that its obsession with identity politics and critiques of capitalism often blind many liberals to the tremendous cultural progress driven by technology and science. What Thiel's critique misses is that the result of this divide is, in effect, a cultural blockade wherein social progressives and technological progressives simply do not understand that they need one another. For the humanities students out there, I'm about to get a little Hegelian: science is the thesis and culture is the antithesis, but only together through the dialectic of science and culture can society reach synthesis and move onward and upward. For the scientists out there, think of it as a chemical reaction, technological progress is just a hydrocarbon in a vacuum; when science is without the reagent of culture and the catalyst of politics no reaction and no energy is released, thus no work can be done. So, the Future as we would like it to be requires a supporting philosophy where in cultural progress is scientific and technological progress and vice-versa. Yet we have scientists and engineers who, rightly, abhor the gridlock and empty rhetoric of politics and, wrongly, scoff at the abstract social critiques, narrative analyses, and identity constructions of the humanities. Conversely, we have an army of cultural critics, writers, and social scientists who can barely work their computers and don't understand why their senior thesis on the patriarchal and proto-postmodern themes in French medieval literature doesn't have companies banging down the door to hire them. What the world needs now are liberal, intellectual, progressive activists who are also engineers, scientists, doctors, mathematicians and technicians. The Future needs

Technoprogressivism, despite the name, is by-and-large not focused on technological progress, but around liberalization of human rights for society and of the self through technological and scientific progress. Technology simply supports that process of political and cultural liberalization and vice-versa. The critical aspect is the fusion and interplay of the two. Biopunks, transhumanists, copy left, geoengineering, and open source movements are great examples of techno-political harmony. As a result culture is bound to science with the purpose of creating a liberal and liberated society. You want a better future? Don't just demand it. Voting, speeches, and protests can only do so much. Learn the skills that will let you come help build it. Or, better yet, team up with the people who have the skills you lack. Hard sciences, social sciences, and humanities unite! Occupy the laboratory. Occupy the future.