For more than a decade, stents have propped open closed coronary arteries in a million people every year. But in about a fifth of these cases, scar tissue reblocked the artery. Now a new design, with a medical coating, prevents most scar tissue from forming. We talked to its creators.

Stent angioplasty is a less invasive alternative to coronary bypass surgery. A small, flexible stainless-steel mesh tube is inserted into clogged arteries and then expanded, allowing the resumption of blood flow to the heart. Cut with lasers, stents are tiny, measuring up to an inch in length and .04 of an inch in diameter before expansion. The side struts are .005 of an inch thick.

Inserting a stent takes about 30 minutes. First, cardiologists typically push a fine plastic-and-wire catheter through a quarter-inch incision in the groin into the femoral artery. Then, following their progress on a fluoroscope, the doctors guide the stent through the iliac artery to the site of the blockage, a distance of roughly three feet. Next, the collapsed stent, crimped around a balloon, is pushed along the catheter until it is in place. The balloon is inflated to a pressure of 220 pounds per square inch for about 30 seconds, expanding the stent to full size, generally .12 of an inch in diameter. Patients must usually lie quietly for four to six hours to make sure the insertion wound has properly closed. They can normally resume regular activity the next day. 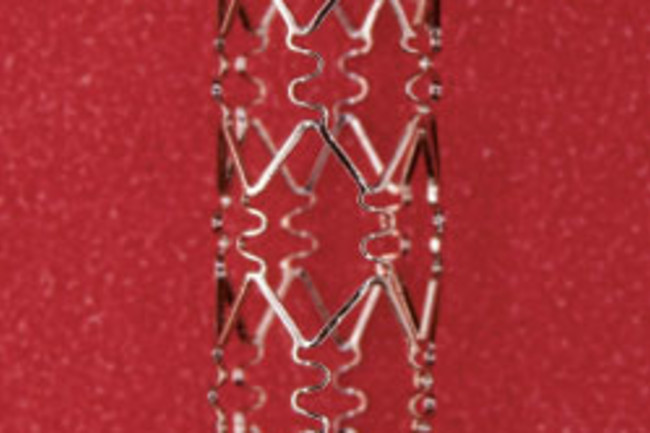 To prevent scar tissue from reblocking the artery, Johnson & Johnson’s new Cypher stents are coated with 180 micrograms of the drug Rapamune, a chemical first extracted from bacteria found on Easter Island and whose name comes from Rapa Nui, the Polynesian name for the island. Bonded to a polymer coating on the stent surface, the drug prevents cells from reproducing. It is most critical in the first five days after a stent is inserted, but the drug continues to diffuse into the system for about three months. Before Rapamune, scar tissue caused blockage, or restenosis, about 20 percent of the time, resulting in stent failure. With Cypher stents, the rate of restenosis has dropped to about 5 percent.

The Cypher stent can bend 90 degrees and snake into tiny arteries. Its flexibility is a function of wavy longitudinal connectors that act like supportive beams between the heavier, zigzag-shaped radial members. David Fischell of Fair Haven, New Jersey, who codesigned the Cypher structure with his father, Robert, says the zigzag-shaped pieces function like “a scaffold in a tunnel” to hold the artery open.

Last year the Food and Drug Administration briefly questioned whether the Cypher caused blood clots but soon announced it had the same low blood-clot rate as other stents. Another company, Boston Scientific, is expected to introduce a competing drug-coated stent within a few months.