If science can figure out how to move electrons across silicon, it can teach watchmakers how to tell us the temperature, the weather, the altitude, the day of the week, the direction of magnetic north, and, yes, even the time—all on the face of a single wristwatch. 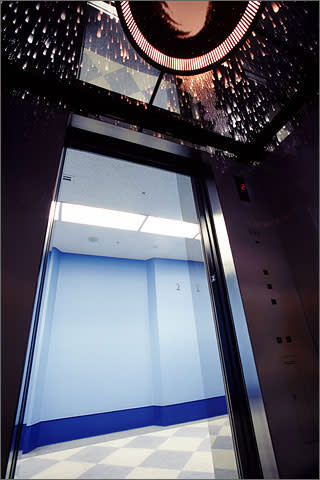 Quartz watches have an integrated circuit (black square at top center of chip) to mete out electricity from the battery in pulses to keep the crystal humming with just the right amplitude. The chip also converts the crystal’s electric pulses to the slower frequencies needed to drive the hands of the watch.

The T-Touch contains a thermometer (you first have to remove the watch from your hot wrist) and an air pressure sensor, or barometer, which provides a crude weather forecast. One of the watch’s five chips keeps track of pressure fluctuations; the two hands point to the right of noon if the pressure is rising, indicating fair weather, and to the left if it is falling.

The sapphire watch glass has transparent electrodes plated onto its underside at seven points around the dial, each corresponding to a function, such as the compass or the altimeter. When you push the button that in simpler times was used to wind the watch, the electrodes are charged. By touching any of the points around the dial, your electrically conducting finger draws more charge into the corresponding electrode. The microprocessor detects that signal and switches the watch to whatever function you’ve chosen.

The timekeeping resonator at the heart of the Swiss-made Tissot T-Touch, the functional equivalent of a clock pendulum, is a single crystal of quartz, an eighth of an inch long and housed in an evacuated cylinder (black square, at top right of chip). As in most quartz watches, the crystal is shaped like a tuning fork and vibrates at 32,768 hertz—more than 6,000 times faster than the balance wheel in a mechanical watch. That is why even a cheap quartz watch is more accurate than the finest mechanical watch.

A quartz watch needs an electric motor to move its hands. The T-Touch has a two-way motor (gray rectangle at center of chip) for each hand—a total of four coils—because it sometimes needs to move its hands counterclockwise.

The T-Touch contains a tiny compass —a magnet of samarium cobalt pivoting on bearings of synthetic ruby. When you select the compass function, the minute hand swings around toward magnetic north and the hour hand toward south. The air pressure sensor, meanwhile, doubles as an altimeter; altitude is displayed on the LCD screen. The watch knows the difference between an imminent hurricane and a climb into thin mountain air. (The compass is the small circle at the bottom of the chip)