In five years physicists will switch on the Large Hadron Collider in Switzerland and begin smashing protons with an energy not seen since a trillionth of a second after the Big Bang. The goal is to study the menagerie of particles that spew from the wreckage. But two physicists think black holes might also be produced.

Steven Giddings, from the University of California at Santa Barbara, and Scott Thomas, from Stanford, base their prediction on a speculative notion that space contains dimensions beyond the familiar three. These extra dimensions could extend a few thousandths of an inch—huge by subatomic standards—but would remain imperceptible under normal conditions. In a powerful particle accelerator, the additional dimensions could make themselves known by increasing the gravitational attraction between two colliding particles. Gravity grows stronger as two masses move closer together. In three dimensions, halving the distance quadruples the attraction. But for a particle existing in nine dimensions, halving the distance increases the gravitational force by a factor of 256. "If you bring two particles close enough together, the gravity could form a black hole," Giddings says.

He isn't worried: Cosmic rays should do the same thing naturally. "Also, black holes evaporate, and the ones we might make should disappear rapidly," in 10-27 seconds, he says. In fact, they could be detected only by the subatomic particles they'd release as they vanished. Finding such showers would be a double breakthrough. It would support the unified physics theories that predict extra dimensions, and it would allow scientists to study micro-black holes. A little blackness might shine a lot of light on the way our universe operates. 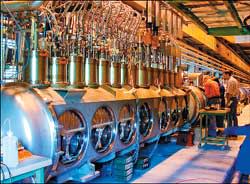 Cryogens cool the magnets that will guide subatomic particles through the Large Hadron Collider.Photograph courtesy of Laurent Guirand/CERN