Not Your Father's Bifocals

Future glasses could use liquid crystals to switch from close- to long-range viewing at the touch of a button. 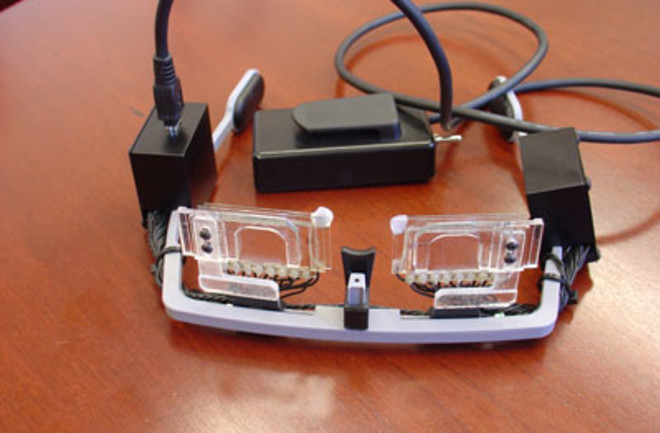 Next-generation bifocals get rid of double lenses. Instead, they use tiny electric voltages and a layer of liquid crystals. | Courtesy of Lori Stiles, University of Arizona

"Nobody in their right mind would wear these glasses," says Nasser Peyghambarian, one of the inventors, referring to the hideous prototype pictured above right. But then aesthetics isn't Peyghambarian's department. An optical scientist at the University of Arizona, he and a colleague have come up with a new approach to bifocal spectacles that may one day revolutionize the way people past a certain age look at menus in restaurants. Rather than juxtaposing two different lens strengths in a single frame, Peyghambarian's device has special lenses that switch from close- to long-range viewing at the touch of a button.

Examples of vision before and after the next-generation bifocals.

The secret is an ultrathin liquid-crystal layer sandwiched between two layers of glass. When an electric current is turned on, the liquid-crystal molecules rotate, thus bending the incoming light like a lens. Future iterations will focus automatically like a camera, rather than requiring wearers to press a button, and with any luck they won't require a head strap.