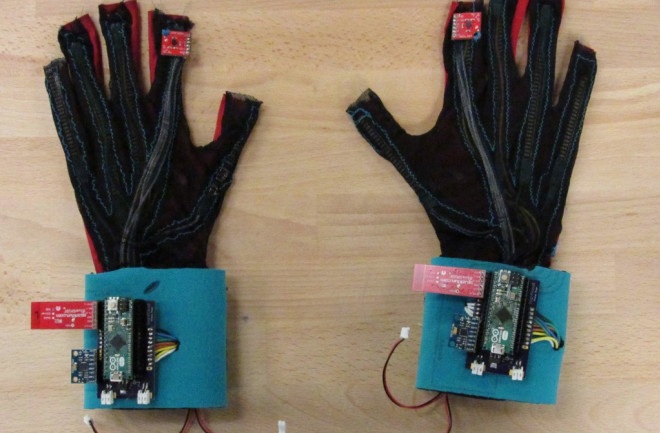 The SignAloud glove. (Credit: University of Washington) Two sophomores at the University of Washington have been recognized for an invention that could break down communication barriers for the deaf. Their invention, the SignAloud, is a pair of sensor-filled gloves that interpret the hand movements American Sign Language users use to communicate, and converts them into speech or text that the rest of us can understand. The two students, Navid Azodi and Thomas Pryor, designed the gloves inside the CoMotion MakerSpace, a collaborative workshop on campus. They recently received the Lemelson-MIT Student Prize for their work, which is a yearly award given to undergraduates for innovative inventions. They won in the "Use It" category, and received a $10,000 grant along with the prize. [embed]https://www.youtube.com/watch?v=4uY-MyoRq4c[/embed]

Their gloves rely on a combination of sensors that interpret hand movements and position to send detailed information to a computer via Bluetooth, where a statistical regression chooses the most likely word or phrase from a database of ASL signs. The computer then outputs the speech as spoken words or text. “Our gloves are lightweight, compact and worn on the hands, but ergonomic enough to use as an everyday accessory, similar to hearing aids or contact lenses,” Pryor said in a press release. Other devices for translating ASL exist, but they can be bulky or awkward. One device relies on a series of sensors attached up and down the forearm, which is then combined with a large arm strap to read muscle movements. Another devices uses a camera to decode ASL — not very useful in the dark. Yet another gadget, the Accelaglove, combines accelerometers and a computer program with a low-profile glove. Those who communicate with ASL often require a translator to make themselves understood. New devices like these will allow them to communicate clearly on their own terms, using technological intermediaries to bridge the gap between signed and spoken language.