Newsflash for Chatroulette Flashers: Your Days Are Numbered 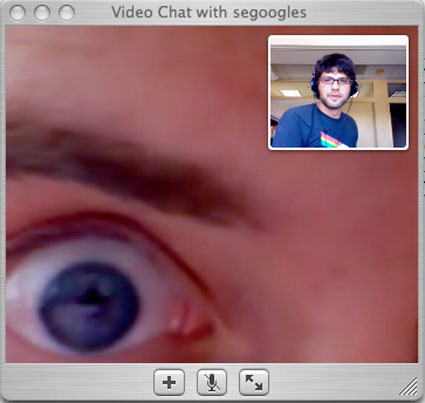 Online flashers could soon be out of a hobby, thanks to a team of software engineers from the University of Colorado and McGill University. The team is developing a system called SafeVchat, which is meant to detect and filter out obscene images, foiling even the fastest of flashers. The team tested their algorithms at Chatroulette, the infamous online video-chat service that lets you communicate with randomly-selected strangers, and the results looked good. As you can probably guess, the problem with seeing video images of random strangers is that some of these people are all-too-eager to show off their flesh. Despite the age restrictions on some video-chat sites and the noble-yet-feeble first attempts at creating filtering software, flashers still peddle their wares with ease and have seemed as unstoppable as a bad rash. But not for long. Enter the engineers. With SafeVchat, Xingu Ying and his research team have created algorithms that monitor the harbingers of flashing, and wipe away the video output whenever it detects too much flesh. As New Scientist reports:

First, they detect facial features - eyes, nose and mouth - in the video because many "misbehaving users" hide their faces. Then they detect whether the upper body is in view as that is often not a priority with flashers. Then instead of merely detecting skin tones, they also seek telltale motion of skin and hands. Finally, they calculate a "misbehaving probability" - and kill or keep the video stream.

The team published a technical report (pdf) on their work, and will unveil their findings in a paper presented at the World Wide Web conference, an annual gathering of web futurists. The engineers are also working to increase the system's response time per stream (currently at 0.9 seconds per stream) so that it can handle all the traffic at Chatroulette. With any luck, the world of techie pervert-dom will soon be stifled, and that's no flashing matter. Related Content: Discoblog: Want to Watch a Mars Rover Being Built? There’s a Webcam for That Discoblog: Momma Bear Will Give Birth to Cubs Live on the Internet Discoblog: To China’s Internet Filter, Garfield is Pornography, Porn is Not 80beats: School Spying Case: School Accused of Taking Thousands of Webcam Photos