New Surveillance Program Listens For Gunshots, Get Police There in Minutes 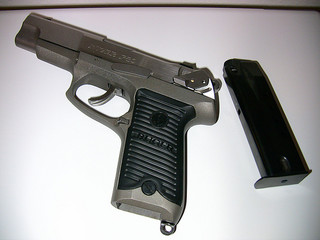 These days, our artificial ears and eyes are better than ever

---and more ubiquitous than ever. A business recently profiled

by the New York Times seems to embody both what's most promising about such pervasive surveillance and also what's potentially disturbing. ShotSpotter sells and helps run an automated gunshot-reporting system to police departments, for a cost of $40,000 to $60,000 per square mile. Recording equipment is installed in neighborhoods and linked software that records sounds that could be gunfire, analyzes them to identify which are actually shots, and then submits its findings for review by a trained employee in the company's Mountain View office. If a human verifies that the sounds are indeed gunfire, the police are notified with the location of the shots, pinpointed to within 40-50 feet. All this can happen in well under five minutes, meaning police can be there right away. Police officials who spoke to the New York Times were generally impressed with the system's sensitivity, especially if they were from high-crime towns like Richmond, CA. It certainly ups the number of shots police get word of:

If nothing else, ShotSpotter has made it clear how much unreported gunfire takes place on city streets. In many high-crime urban neighborhoods, gunshots are a counterpoint to daily life, “as common as the birds chirping,” as Cmdr. Mikail Ali of the San Francisco Police Department put it. But whether out of apathy, fear or uncertainty, people call the police in only a fraction of cases. In the Bayview-Hunter’s Point neighborhood of San Francisco, for example, where one square mile is covered by ShotSpotter sensors, only 10 percent of the verified incidents of gunfire detected by the system were accompanied by 911 calls, Commander Ali said. In Oakland, Sergeant Bolton said, only 22 percent of the verified gunfire the system detected over a three-month period was also reported by residents.

But the cost of the system, and the question of whether it records things it shouldn't, are causing some controversy. ShotSpotter has, in at least one case, recorded voices along with gunfire (though it only starts recording once a shot has been fired, or at least once a shot-like sound is heard, according to a vice president of the company). Two men who are accused of murdering another in New Bedford, Massachusetts, last year can be heard on the ShotSpotter recording of the events. Whether what they say on the recording can be used as evidence in the case has yet to be decided. It hinges on whether you have a reasonable expectation of privacy after you've fired a gun in a public place.