New Robots Could Tell Whether the Wine is Fine 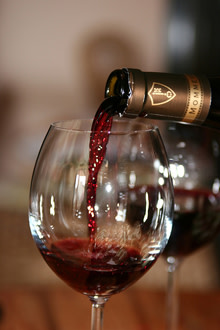 Most people, even without refined taste for wine, probably could taste the difference between vino from a box and a $50 chardonnay. But perhaps few of us have the palette to tell a really good wine from a really, really good wine. Well, fear not—the machines are coming to do the job for us. Two different groups have recently announced new designs that could help consumers know whether they're guzzling the good stuff or imbibing a fraud. First, scientists at the Argonne National Laboratory created a counterfeit-resistant cap. Roger Johnston and Jon Warner's design fits over the cork, and once it's attached to the wine bottle, it completes a circuit. Should anyone tamper with the bottle, in an attempt to fill it up with cheaper wine or newer wine and pass it off as the original, they would break the circuit. A wine seller or buyer could hook up the cap to their computer via USB. Then the fancy cap can tell them whether the circuit had been broken. And if wine counterfeiters get around the electronic cap, Spanish researchers created another method of detection—the electronic tongue. The robot, the brainchild of Cecilia Jiménez-Jorquera from the Barcelona Institute of Microelectronics, contains six sensors to measure wine characteristics like alcohol content, sugar, and acidity. Even if our taste buds aren't cultured enough to pick out a true Bordeaux, the machine's emotionless chemical analysis can tell every time. Still, while new gadgets might help you know whether that vintage you're buying really is what the label says, these kinds of machines could diminish one of America's favorite dinner-party pastimes—pretending to know about wine.