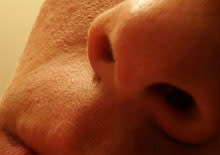 In a development that may pave the way for the invention of an "artificial nose," researchers have found a way to mass-produce the odor receptors found in human nostrils. An artificial nose could have military applications:

DARPA has taken an interest in the research, which it believes could lead to the development of tools to replace drug- and bomb-sniffing dogs [io9].

But the technology could eventually be used in medical diagnostics as well, as diseases like skin and bladder cancer have distinctive odors.

Many researchers worldwide are working on "E-noses", which detect the same molecules that make up the scents we recognise.... However, while many rely on sensors constructed from artificial materials, the US researchers are working on a sensor with the biology of the human nose at its centre [BBC News].

The olfactory receptors that identify odors are proteins that rest on the cell membranes of the roughly 40 million olfactory neurons that humans have in their nasal cavities.

Until now, efforts to understand the molecular basis of smell have been stymied by the difficulty in working with the ... olfactory receptors. "The main barrier to studying smell is that we haven't been able to make enough receptors and purify them to homogeneity," says co-researcher ... Brian Cook [ABC Science].

The olfactory receptors are accustomed to sitting on the layer of fatty lipid molecules that make up cell membranes and lose their structure when exposed to water, which has hampered previous research. But in the new study, which will be published in an upcoming issue of Proceedings of the National Academy of Sciences [subscription required], researchers found a way around the problem by developing

a detergent solution which protected [the receptors] during the production process. They then carried out basic tests which showed the manufactured proteins still had the ability to lock on to the molecules they needed to detect [BBC News].

Get some background on the military's interest in E-noses in the DISCOVER article "Future Tech," and read about the latest developments in the blog post "Go To Jail--You Smell Like Drugs."

Related Posts: Mammals Have a Nose for Danger (Literally)