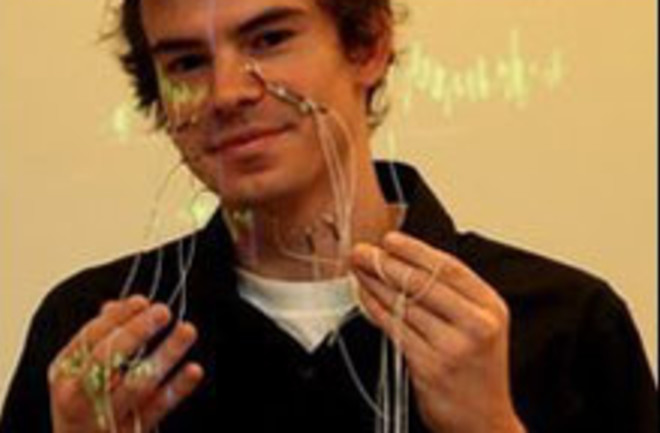 The next time you come across a loudmouth yammering away into a cell phone at top volume, be comforted by the fact that researchers are working on a mobile phone that could put an end to "volume-control challenged" people. The lip-reading phone would allow people to silently mouth their words--but the electrode-heavy prototype seems unlikely to catch on anytime soon. The BBC reports:

The device, on show at the Cebit electronics fair in Germany, relies on a technique called electromyography which detects the electrical signals from muscles. It is commonly used to diagnose certain diseases, including those that involve nerve damage.

Professor Tanja Shultz of the Karlsruhe Institute of Technology, Germany explained that the device requires attaching nine sensors to the face. As the user mouths words, the electrodes capture the electric impulses created by the muscle movement. These impulses are transferred to a device that records and amplifies them, before passing them onto a laptop via wireless. Software in the laptop translates the signals, converting them into words which can then be read out by a synthesizer in handset and sent over the wire to the person on the other end of the phone call. The whole process is pretty cumbersome and the creators agree that this phone might not be meant for the mass market. But Shultz says all this tech could one day be packed into a mobile phone. The device could also be a a good option for people who have lost the ability to speak, putting in their hands a device that can allow them communicate clearly. The phone also has a translation option, wherein a person can speak in their mother tongue and have the text communicated in English or any other language. The BBC's report points out that this is not the first time that this technology for silent communication has been used.

The US space agency Nasa has investigated the technique for communicating in noisy environments such as the Space Station. It has also used the technique to explore advanced flight control systems that do away with joysticks and other interfaces.