New Lenses Could Give You Super Color Vision 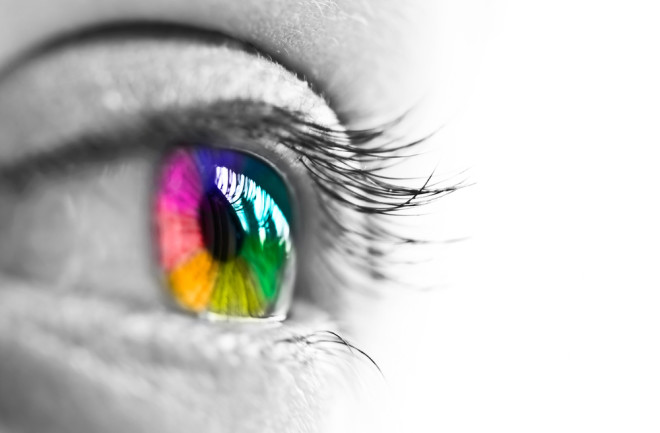 (Credit: Delpixel/Shutterstock) Thanks to the architecture in our eyes, we see but a small subset of the hues that make up the visible spectrum. We only have three kinds of cones, or color-sensitive cells, to make sense of what could be millions or even hundreds of millions of colors. We still do a pretty good job of it — normal human eyes can pick out about a million different colors, far more than we have ever come up with names for. Still, we could conceivably do better. More cones would detect more combinations of colors and ever more subtle distinctions between shades. Some people, called tetrachromats, actually possess an extra cone and can see colors invisible to the rest of us. Now, for those of us not blessed with such a mutation, researchers at the University of Wisconsin-Madison have devised a pair of lenses that splits the color spectrum to turn us into artificial tetrachromats.

Splitting One Cone Into Two

Mikhail Kats, a professor in the department of electrical and computer engineering, and his graduate student, Brad Gundlach, focused on a specific type of cone in our eye that is responsible for seeing blues, or the high frequency end of the visible spectrum. It works like this: We actually have six cones, not three, because each eye contains its own set. Normally, each eye's cones pick up on the same wavelengths of colors. By selectively blocking out different parts of the spectrum in each eye with their lenses, the cones that normally worked together now send separate packets of information to our brains. Kats says this effectively simulates an additional cone by giving each of our blue photoreceptors a different half of the spectrum. Each eye then sends a different signal to the brain when confronted with the color blue, and when it combines that information, new colors emerge. The technique could theoretically give us as many as six kinds of cones using various combinations of lenses. They published their work on the preprint server the arXiv.

A demonstration of the lenses with two different shades of purple. The two lenses on top split the blue spectrum, while the bottom lens is unfiltered. Combining the top two lenses gives us an extra photoreceptor cone. (Credit: G. Vershbow/B. Gundlach/M. Kats)

In tests with butterfly wings and mosaics of different blues, the researchers saw shades of blue that were previously lumped together into what's called a metamer. Because our eyes can't possibly pick out every single wavelength, we combine similar bands of the spectrum into packets. This essentially defines an upper limit for color resolution, because there are only so many ways to combine these color packets. It's estimated that each cone can distinguish about 100 different shades of a color. With three cones, all of the possible combinations create about a million colors — add another cone and we can potentially see one hundred million colors. The researchers hope to expand their experiment to the other two types of cones that respond to red and green light in order to explore the many hues we're missing in the rest of the spectrum. Their lenses could potentially be used to detect camouflage, or to detect counterfeits, as well as at the grocery store to separate ripe fruit and vegetables from those that are too ripe.