New Laser-Producing Device is as Small as a Virus

Technology could lead to ultrafast light-based data processing and storage. 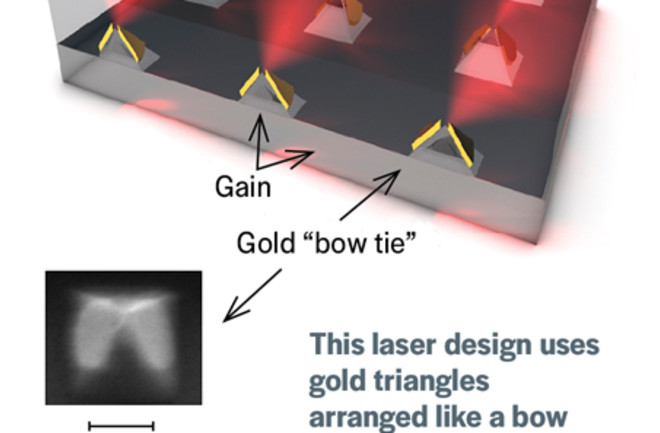 Nanoengineers have a shiny, new tool at their disposal: laser-producing devices the size of viruses. The Lilliputian contraptions consist of two gold triangles whose peaks are pointed toward each other, creating a sort of three-dimensional bow tie shape.

This particular geometry forms a “hot spot” between the metallic triangle points capable of concentrating electromagnetic fields in a small volume — just tens of nanometers across.

“Shape is really important,” says chemist and materials scientist Teri Odom of Northwestern University, the corresponding author of the findings. Typically, lasers require a much larger cavity that allows light to bounce back and forth between mirrors for it to become amplified into a laser (light amplification by stimulated emission of radiation).

“That’s what’s spectacular about the structure of these materials — you can get unexpected properties out,” Odom says.

Generating laser light at such a small scale is possible because of localized surface plasmons, sets of electrons that collectively oscillate as one from within the narrow gap between the triangles. Energy is freely transferred into the plasmons from excited molecules incorporated into the devices, which get their energy from a typical large-scale titanium sapphire laser. The plasmons then release their energy in the form of the small-scale laser.

The plasmon nanolasers are easy to make using conventional techniques, Odom says. The nanolasers emit rays in the near-infrared range, but they could shoot light in other frequencies, including the visual spectrum, with alterations to the shape or material.

The devices also work well at room temperature, making potential applications that much more convenient. Odom says mini-lasers like these could one day enable ultrafast data processing and storage via light-based circuitry.

[This article originally appeared in print as "Virus-Size Lasers."]