An acoustics engineer finds out how to avoid a batter's painful hand vibrations. 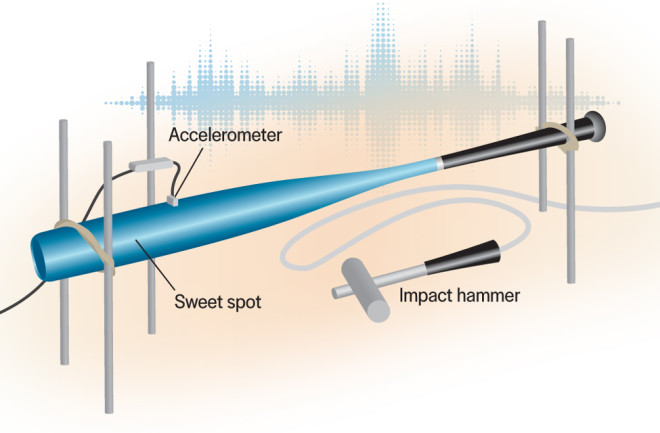 Anyone who has ever hit a baseball off the wrong part of the bat knows the shot of pain that courses through your hands. Now, thanks to acoustics engineer Daniel Russell of Pennsylvania State University, that unpleasant jolt could become a relic of the game’s past.

Russell, who has been devising baseball-centric experiments for years, recently helped solve the physics mystery at the heart of the infamous sting. Nearly a decade ago, baseball equipment manufacturer Marucci Sports put a vibration damper inside its aluminum bats to eliminate the pain, but the technology was not working as well as hoped, so the company recruited Russell.

After interviewing several college players, Russell learned they all felt pain in the same spot: the fleshy tissue between the thumb and forefinger in the upper hand of their grip. They all held the bat in roughly the same place, so Russell analyzed the corresponding region in his lab. He used two rubber bands attached to either end of a frame that suspended the bat horizontally. Then he struck the bat at various points with a hammer. An accelerometer affixed to the barrel of the bat tracked the vibrations while a transducer in the hammer’s tip measured the force applied.

Striking the bat five to six inches from the tip, an area known as the sweet spot, generated virtually no vibration. Smacking it outside the sweet spot, on the other hand, forced 450 to 700 vibrations per second to pulse at the bat’s grip, thereby causing the sting. And these vibrations peaked in intensity right where the player typically holds his upper hand.

Russell realized nothing was wrong with the damper, which consists of a rubber-spoked wheel that transfers vibrations to a brass weight set inside the knob of the bat. The idea was right — the weight should have absorbed the pulses — but the device was tuned to the wrong frequency.

Marucci adjusted its dampers and later used Russell’s findings to develop a new Kevlar-based grip that also cancels the sting. Recently, other companies have begun using the dampers. Now a poorly hit ball isn’t so painful. “This little brass piece vibrates like crazy, but you don’t feel it in the hands at all,” Russell says.

[This article originally appeared in print as "Silencing the Sting."]