Nerve Cells Reach Out and Touch Someone: Electronic Components

: Scientists have discovered a new technique for linking semiconducting tubes with mouse nerve cell tendrils: They let the cells do the work for them. After creating biologically friendly semiconductor tubes, they found that nerve cells' tendril-like axons didn't shy away. "They seem to like the tubes," University of Wisconsin-Madison biomedical engineer Justin Williams told Science News. This represents a step toward new technology involving computer-brain networks. How the Heck: The trick was to create tubes of layered germanium and silicone (which insulate the nerve's electrical signals) that were big enough for the nerve cell's threadlike projections to enter but too small for the cell body: When seeded with live mouse nerve cells, the only way the cells could interact with the tubes was be sending tendrils into it---which is just what they did. What's the Context: 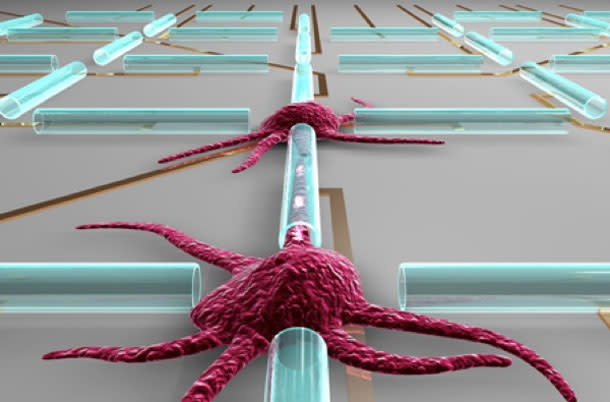 Not So Fast: The researchers don't yet know whether the connected nerves are actually talking with each other. Next Up: Now they want to hook the tubes to voltage sensors that can "listen" to the cells communicating with each other. If successful, this could lead to new drug tests where doctors can actually measure how nerve cells respond to certain types of drugs, leading to further innovations in the battle against neurological diseases like Parkinson's. Image: Minrui Yu, University of Wisconsin–MadisonReference: "Semiconductor Nanomembrane Tubes: Three-Dimensional Confinement for Controlled Neurite Outgrowth" Minrui Yu et al. DOI: 10.1021/nn103618d