Even tiny nerves obscured by trauma or disease would be hard to miss if they glowed neon green. 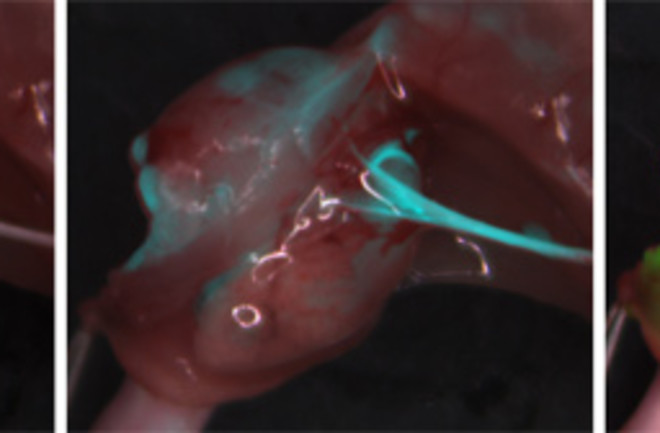 Quyen T. Nguyen and her colleagues at the University of California, San Diego recently made a discovery that may make neurosurgeons' work a lot easier in the future: Her team discovered a molecule that sticks to nerve cells, tagged it with a fluorescent compound, and injected it into mice. Within two hours the rodents’ peripheral nerves stood out as if traced with luminescent paint and stayed that way for six hours. Nguyen’s ultimate goal is to help reduce the number of nerves accidentally nicked or severed during surgery. The technology could be especially helpful in surgeries for prostate cancer, Nguyen says, where injured nerves can occur up to 80 percent of the time.

Meanwhile, another fluorescent tool stands to help diabetics monitor their blood glucose levels without the painful finger pricks. University of Tokyo engineer Shoji Takeuchi and his team developed microscopic fluorescent beads that bind to glucose. In tests in mice, the beads glowed through the animals’ skin under ultraviolet light, varying in brightness as blood glucose levels changed. Takeuchi notes that in humans, a single injection of the beads could last more than a month, and a wearable monitoring device could periodically shine UV light on the skin to measure glucose levels. “We want to make it small enough to wear as an earring,” he says.