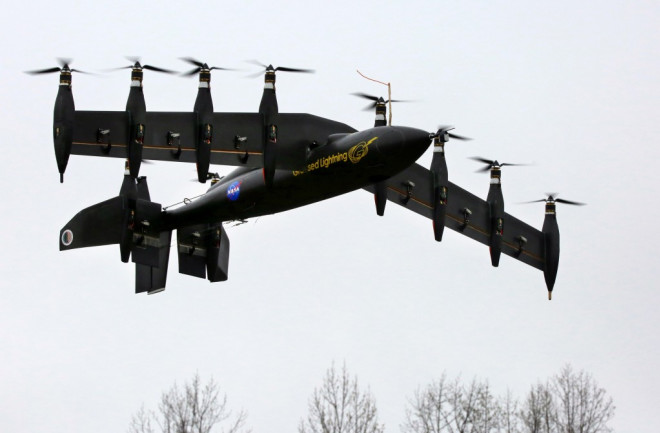 The GL-10 can take off vertically and transition into traditional winged flight in mid-air. (NASA Langley/David C. Bowman and Gary Banziger) NASA has rolled out what looks like the B-52 of unmanned aerial vehicles. Last week, NASA engineers successfully tested the Greased Lightning GL-10, which is a battery-powered, 10-rotor remotely piloted aircraft that can perform a useful trick: It takes off and lands like a helicopter, but can also transition to conventional flight in mid-air. Shifting from hover to wing-borne flight has long flummoxed aerospace engineers, but the GL-10 looks like a big step in the right direction.

The GL-10 is NASA’s vision for the future of tilt-rotors, or aircraft that can vertically take off, but fly like traditional airplanes. Vertical takeoffs make the craft deployable in tight spaces, and shifting to winged flight makes it more efficient than a helicopter. The United States Marine Corps and Air Force already deploy hundreds of V-22 Osprey tilt-rotors all over the world, but these machines have a spotty — sometimes fatal — track record.

So engineers at NASA went to work designing a better tilt-rotor by rapidly prototyping scaled-down designs. They built 12 prototypes, starting with simple five-pound foam models, and built up to the current GL-10 prototype that weighs 62 pounds and is constructed with high-quality carbon fiber. The GL-10 has four engines on each wing, and two on the tail. The GL-10 past all its hovering tests with flying colors, but on Thursday engineers were anxious to see if the aircraft could transition between flight modes without falling from the sky near NASA’s Langley Research Center in Virginia. It passed. "During the flight tests we successfully transitioned from hover to wing-borne flight like a conventional airplane then back to hover again. So far we have done this on five flights," aerospace engineer Bill Fredericks said in a news release. "We were ecstatic. Now we're working on our second goal — to demonstrate that this concept is four times more aerodynamically efficient in cruise than a helicopter."

Engineers hope to spin the GL-10 prototype into a number of commercial sectors. As a scaled-down UAV, the GL-10 could easily transport small packages, perform surveillance or help farmers monitor their fields for less cost than traditional flyovers. However, Fredericks also hinted that a scaled-up version of the GL-10 would also make a fine one- to four-person aircraft. We’ve all heard of octocopters, but NASA is proving it may be time to add decacopter to our vocabulary.