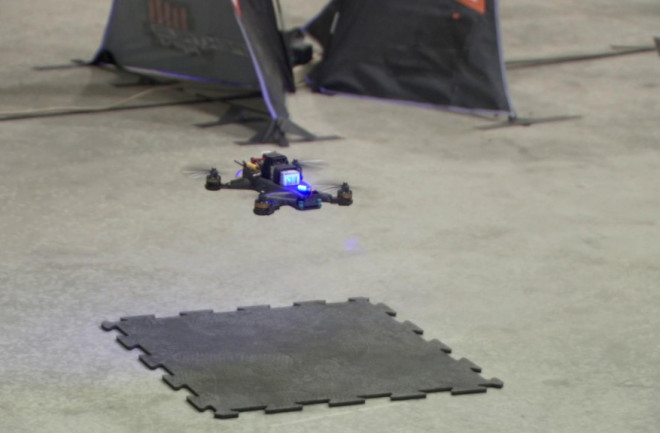 (Credit: NASA/JPL-Caltech) Artificial intelligence (AI) still has a ways to go before it reigns supreme. In October, a group of researchers at California’s NASA’s Jet Propulsion Laboratory (JPL) pitted a professional human drone racer, Ken Loo, against an AI-piloted drone. They set out to test two years of research into drone autonomy, which was funded by Google. The researchers built three custom drones with algorithms that were outfitted with Google’s Tango, a platform that uses computer vision to help devices navigate the world around them. The camera-based localization and mapping tech could reach far beyond drone racing, one day even potentially helping robots autonomously navigate the space station. Each drone was capable of reaching speeds up to 80 mph, but the winding racecourse limited the drones to just 40 mph. (Not quite as fast as the drone pilot who zipped through a moving train car, but still speedy.) "We pitted our algorithms against a human, who flies a lot more by feel," said Rob Reid of JPL, the project's task manager, in a news release. "You can actually see that the AI flies the drone smoothly around the course, whereas human pilots tend to accelerate aggressively, so their path is jerkier." https://www.youtube.com/watch?list=PLTiv_XWHnOZoPT2VCxZJOF7Vg1VTNuGj4&time_continue=18&v=SrqrGweKQAU While the autonomous drone flew more consistently, it just didn’t measure up to the human pilot’s skill. On the official laps, Loo averaged 11.1 seconds and the AI-piloted drones averaged 13.9 seconds. Better luck next time, AI.