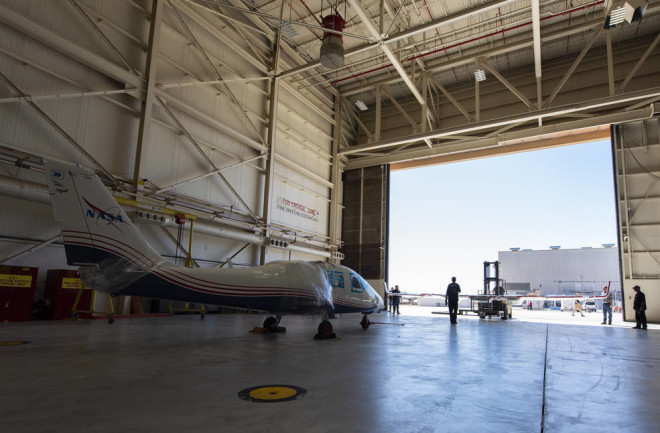 NASA is getting ready to test its first all-electric plane, the X-57 Maxwell, at the Armstrong Flight Research Center at California’s Edwards Air Force Base.

This latest version of the aircraft, called Modification II or Mod II, just arrived at Edwards from San Luis Obispo, California, where the plane was being developed by Empirical Systems Aerospace Inc.

For Mod II, the typical combustion engines have been replaced with electric cruise motors. And with the new engines, NASA can now begin the next phase of testing on the experimental craft, bringing it a step closer to reality.

The X-57 is based on a twin-engine Italian aircraft popular among private aviators and known as the Tecnam P2006T. NASA planned four rounds of modifications to take the plane from its base model to a completely electric aircraft.

During Modification 1, the Tecnam’s two internal combustion engines were replaced with 14 electric motors. In the latest modification, Mod II, the batteries and instrumentation were updated. NASA says it now can move on to test flights. In Mods III and IV, engineers will keep developing the plane and conduct final tests, including on the wings.

By exploring technology in electric aircraft, NASA hopes to take a step toward eliminating the carbon footprint from flights. Currently, jet fuel emissions are a major contributor to Earth’s greenhouse gas problem. Throughout testing, NASA plans on sharing the information it learns about the electric plane with the larger industry.

X-planes, or experimental aircraft, have been a pillar of NASA’s aeronautics sector for a long time. In fact, NASA has been testing X-planes at the Armstrong Flight Research Center since the 1940s.

But most of the aircraft tested there have been focused on high-speed flight. And while the X-57 won’t be fast, it will be the NASA’s crewed X-plane in two decades.