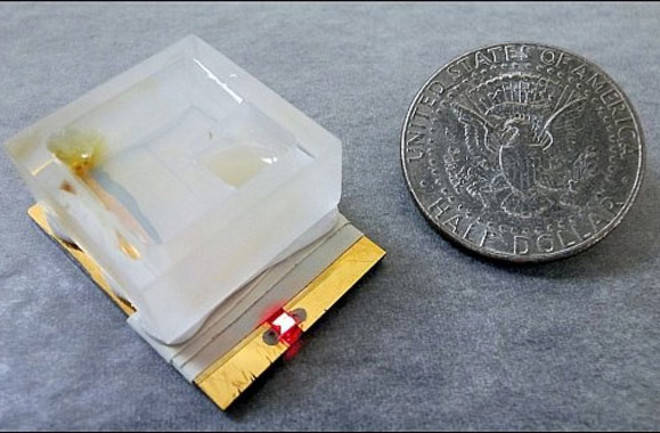 Grad students are a notoriously impoverished group, and so it's only fitting that one has invented a pancreatitis test using a dollar's worth of materials. In less than an hour, Reynolds Wrap, JELL-O, and milk can tell you whether you have pancreatitis, a sudden pancreas inflammation that can cause nausea, fever, shock, and even death. Invented by biochemistry grad student Brian Zaccheo, this match-box-sized test detects high levels of trypsin, a pancreatic enzyme that's abundant in pancreatitic patients. The diagnosis involves two simple steps: First, you drip some blood from a patient onto a gelatin and milk-protein layer, which breaks down in the presence of trypsin. Second, you add a drop of sodium hydroxide, or lye, which---if the trypsin has reacted through the entire gelatin layer---dissolves the Reynolds wrap that's underneath the gelatin; the dissolved foil frees up a connection between a magnesium anode and an iron salt cathode, which creates enough current to light a red LED. “In essence, the device is a battery having a trypsin-selective switch that closes the circuit between the anode and cathode,” Zaccheo writes in a paper published in Analytical Chemistry. The patients know if they have pancreatitis if the LED lights up within an hour. Although this elegant test is touted as the cheapest and fastest way of diagnosing pancreatitis, not everyone is impressed. A surgeon writing on the Skeptical Scalpel blog points out that the preferred test (a measure of the patient's lipase levels, a type of enzyme) only costs about $6.00 to perform on a patient and that the results are also read within an hour. And unlike the blinking LED, which only tells you whether or not you have pancreatitis, the lipase test gives you a number that tells you whether the pancreatic inflammation is getting worse. So it looks like this new test might be most useful in developing countries that don't have the equipment necessary for the lipase test---if the gelatin method is shown to be robust enough to be used broadly in the field. As Zaccheo says, all you really need to know is "how to use a dropper and a timer." And who knows, if the test diagnoses you with pancreatitis and you survive, you might even be able to snag an appearance in a JELL-O commercial, spreading the word on how the jiggly treat saved your life. Related Content: 80beats: Diagnostic Lab Made of Paper and Tape Could Lead to a 3-Cent HIV Test 80beats: Labrador Retriever Sniffs Out Bowel Cancer Patients The Intersection: Mouse model that answers your health questions DISCOVER: The Dark-Horse Lab That Just Might Figure Out FusionImage: Texas Science