Move Over Hops, Yeast Can Give IPAs Their Signature Flavor 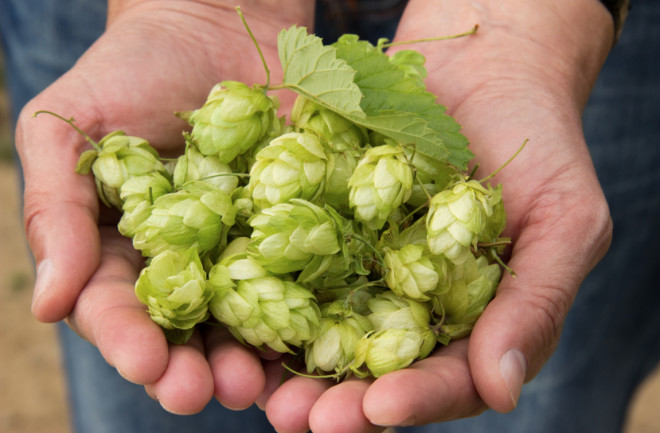 The craft brew revolution is fueled by an earnest pursuit of hoppiness.

Many craft beer enthusiasts are drawn to the potent, bitter, aromatic flavors of a primo India Pale Ale (IPA), and brewers take pride in delivering a roundhouse kick to mouth in every bottle. Indeed, the names of IPAs often connote a cataclysmic struggle between man and beer: Hoo Lawd, Hopslam Ale, Pound Town, Hoptrocity, Ruination. You get the point.

As the names suggest, hops—the flowers of Humulus lupulus—are key to the flavor profile of an IPA. During the brewing process, specific hops are typically added to the wort boil to impart a bitter flavor, and a different hop species is added at the fermentation stage to impart a hoppy, aromatic flavor. But that distinct flavor comes at a cost.

Hops are an expensive ingredient for breweries to source, and they also require an abundant amount of water and energy to grow and transport. Roughly 100 billion liters of water are needed to produce the domestic supply of hops annually, along with the infrastructure to deliver said water and the carbon-based fuels to ship it. IPAs are also the most popular style of craft beer by dollar share, and consumption of hops has skyrocketed over the past decade.

But hops could someday be out of a job, replaced by the master of all trades: brewer’s yeast. Advances in gene editing techniques have turned these microscopic fungi into chemical factories that can produce safer opioids, spider silk, and even milk. Now, Charles Denby, Rachel Li and colleagues from the Joint Bioenergy Institute in California borrowed genes from mint and basil plants to engineer industrial brewer’s yeast that pull double duty: They produce alcohol through fermentation and produce flavor molecules that impart the aromatic, hoppy flavors in IPAs—without the hops.

“We come from a lab that’s really focused on technologies that make processes more sustainable, cutting out all of the water and natural resources required for hop agriculture,” says Denby. The team’s work was published Tuesday in the journal Nature Communications.

But apart from reducing the environmental costs of producing beer, genetically modified yeast may open beer lovers to an entirely new universe of flavors and experiences. IPAs were but an introduction to a new universe of suds.

“One thing we are beginning to learn is that combining flavor molecules from hops in different ratios provides access to a much wider variety of flavors,” says Li. “We think that using hops for brewing has just scratched the surface of what flavors can be made by varying combinations and concentrations of hop flavor molecules.”

So How Did They Do It?

The hop flower is covered in glandular trichomes, which are specialized structures that secrete metabolites that accumulate as sticky essential oils. These essential oils contain monoterpenes, or the class of metabolites that give hops their flavors. Denby and Li, building on decades of research, identified two monoterpenes—linalool and geraniol—that are responsible for that desired hoppy flavor. The trick was to splice genes that dictate production of these metabolites into yeast. It would seem natural to pull those from hops themselves.

However, splicing genes from hops to yeast proved difficult, so researchers looked to alternative plants, such as highly aromatic herbs. As it turned out, genes from mint and basil proved far easier to incorporate into brewer’s yeast—linalool from water mint and geraniol from basil.

“We are able to generate a number of different flavor molecules with only four genes, two of which were already functioning in yeast,” says Denby.

Denby and Li also brewed sample IPAs and compared them to IPAs brewed the traditional way, and the results were pretty good. Tasters noted interesting, desirable flavors like Fruit Loops and orange blossom, and they didn’t catch a hint of any “off” flavors. To be clear, Denby and Li’s work focused on the part of the brewing process where hops are added for aromatic flavors. Hops added during the wort boil, for bitter notes, are a different species of hops that are less demanding to grow.

“The flavored hops are the majority of the hops that are grown in the U.S. for making beer. They are the most natural resource-demanding, and have lower yields than the crops grown for bitterness,” says Denby. They started by focusing on this end of the process, but you can expect them to tackle the other half of the problem in the near future.

For Denby, biosynthesizing hop flavor is a process that’s profound in its simplicity and consistency. Hops from the farm can vary in their flavor profile depending on the harvest, while yeast produce the same flavor with every single brew. That’s a highly desirable trait for a craft brewer whose reputation depends on delivering the same Hopslam Ale in every bottle.

But here’s the most exciting part: mint and basil are just the start. There are myriad plant species with unique flavor molecules that could theoretically be spliced into yeast to produce new kinds of beers. Even shifting the balance of hoppy molecules can yield new flavors. Denby and Li have really only offered the world a preview of beer’s new potential.

“We’re just scratching the surface in terms of what yeast can do,” says Denby.