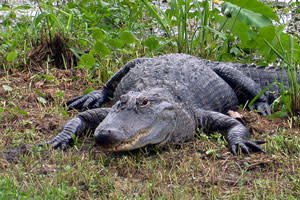 A genuine alligator-leather purse could put you out hundreds of dollars, but alligator fuel may come fairly cheap. Large fuel plants could produce biofuel from alligator fat for as little as $2.40 a gallon, suggests a recent paper published in the journal Industrial Engineering Chemistry Research

. Last we checked, the old-fashioned stuff from long-dead critters was retailing for a buck or so more. Why use gator fat for fuel? Well, as chemical engineer Rakesh Bajpai and his colleagues at the University of Louisiana pointed out, some 15 million pounds of alligator fat is wasted each year. Alligator farms

harvest the animals' hides and meat to make fashionable accoutrements and deep-fried appetizers, but the ancient creatures' fat just gets dumped into landfills. Knowing that alligator fat has a high lipid

content, which is useful for biofuel, the researchers decided to test how feasible making alligator juice really is. After treating the fat with chemical solvents and shoving it into a microwave, the team was able to convert about 61 percent of the fat into lipids for biofuel. They then refined some fuel from the lipids and found that it has about 91 precent of the energy content of petroleum diesel. All that wasted alligator fat could be transformed into 1.25 million gallons of fuel

, the researchers say. Sounds like a lot, but that's just a tiny fraction of the over 300 million gallons of biodiesel the U.S. produced last year

(most of which came from soybean oil), and an even smaller fraction of the 45 billion gallons of diesel the country consumed in 2008. But still, the fat would be trashed anyway. What do you think—should we be turning alligator fat into fuel? [via New York Times