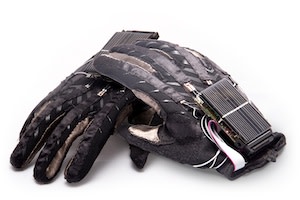 Prototype of the EnableTalk gloves

Programs that transform typed words into speech are old hat. But what about a tool to translate sign language into audible conversation? Ukrainian students have created gloves that can sense what the hands are signing and a program that translates the signs into both text and speech. The project

, called EnableTalk, is a finalist in Microsoft’s Imagine Cup competition. According to a 2005 estimate

, about 2 to 4 out of 1,000 Americans are completely deaf, and as many as 22 out of 1,000 have severe hearing loss. For most of the general public, however, sign language is as foreign as ancient Greek, which makes communication with the hearing-impaired difficult. EnableTalk may be able to bridge that language barrier with a smartphone and a pair of sensitive gloves---“sensitive” in that they are equipped with flex sensors to detect fingers’ positions and other sensors

to define the hands’ positions in space. A smartphone app receives the hands’ movements via Bluetooth, matches them with stored signs, and then displays the written words and says them aloud. Users can also add new signs to the system. Perhaps the greatest innovation is the suggested sale price of $400 per pair of gloves---similar existing projects cost as much as $1,200. [via Tech Crunch