Most Realistic Android Yet: Have We Passed the Bottom of the Uncanny Valley? 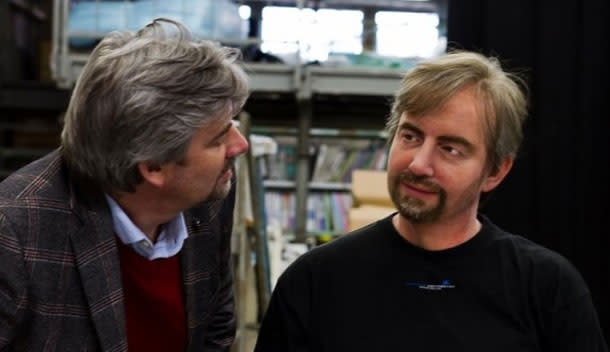 The latest Geminoid robot is the most lifelike one yet, and yet I still think there's something creepy about its glazed, deadbeat expression and evil (OK, I might be reading into it) side-long glance. His name is Geminoid DK, and yes it's a he: Henrik Scharfe of Denmark's Aalborg University worked with Japan's Kokoro entertainment company to create this avatar of himself. The android holds the distinction of being the first Geminoid modeled after a non-Japanese person (it's also the first facial-haired bot of the lot). http://www.youtube.com/watch?v=eZlLNVmaPbM&feature=player_embedded Like DK's Geminoid predecessors, he is controlled remotely via a motion-capture system: When Scharfe frowns, the robot frowns, and when he smiles, the robot smiles. In addition to facial expressions and lip movements, this Internet-linked robot also captures the professor's body movements. In the near future, Scharfe plans on testing his robotic twin on his university class before shipping it back to Denmark's new Geminoid Lab for further tweaking. Related Content: 80beats: The Latest Robot From Honda: A "Walking Assistant" to Push You Upstairs 80beats: Honda's Mind-Controlled Robot Could Be Your Avatar in the Real World Discoblog: In Japan, a Robot Works the Catwalk DISCOVER 4 Robots That Are Saving the WorldImage: Geminoid