Monkeys Use a Electronic Brain Interface to Move Paralyzed Limbs 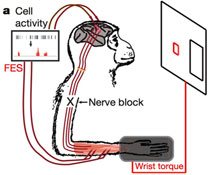 In a new study, researchers attached electrodes to individual neurons in monkeys' brains and then rerouted those neuronal signals through a brain-machine interface, which converted them into electrical signals that controlled the monkeys' own paralyzed muscles. Researchers say this roundabout feat of bioengineering could eventually lead to new treatments and prosthetics for paralyzed people.

The implant exploits the fact that even when the neural connection between a brain region and the muscles it controls is severed or damaged by, say, a stroke or spinal injury, the controlling neurons remain active. For example, people living with quadriplegia who try to move their arm still generate arm-movement signals in the motor cortex of their brain, even after several years of paralysis [New Scientist].

The new study is the first to send the signals back to the user's own muscles, as opposed to related research in which the signals are fed into electronic devices. In the study, published in Nature [subscription required], researchers first taught normal monkeys to play a computer game in which they moved a cursor by twisting their wrists, and gave them a treat (applesauce) when they did it correctly. Then they temporarily paralyzed the monkeys' wrists with an anesthetic and hooked up the brain-machine interface. Not only did the monkeys quickly learn to move the cursor by using the interface to control their wrist muscles, but the scientists also

found the monkeys could learn to use virtually any motor cortex nerve cell to control muscle stimulation - it did not have to be one that would normally controlled arm movement [BBC News].

In previous brain-controlled robotic experiments, researchers tried to identify all the neurons that were associated with a particular movement, and then plugged electrodes into those neurons. In the current study researchers took a different approach: They weren't picky about which neurons their electrodes latched onto and relied on the monkeys to learn how to use the neurons in the correct way, abetted by biofeedback and that tasty applesauce.

"We used a direct connection between single cells and single muscles, which are then able to provide an intuitive and immediate consequence of cell activity," said Fetz. "It's much more direct than decoding a large population of cells" [Wired News].