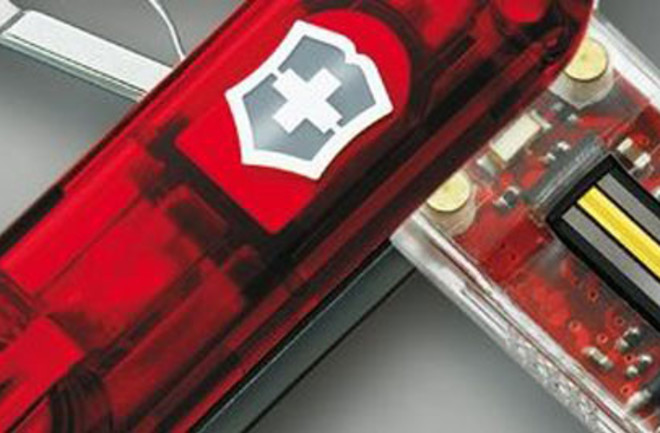 For all those outdoorsy types, a Swiss army knife, preferably by Victorinox, is a must. The all-purpose knives can come packed with everything from blades to screwdrivers to tweezers, but over the years, Victorinox has upgraded its knives to give them more modern tools--like small flashlights, ball-point pens, and even USB flash drives. However, still not satisfied, the company upgraded one of its products. It now offers a knife with a removable USB flash drive with 32GB storage and enough security features to make a high-tech bank vault hang its head in shame. Like they say, this is not your grandfather's knife. The new Victorinox Secure's USB stick won't let just anybody plug it into a computer to download its contents. The memory drive features a system that first identifies your fingerprint before allowing you in. If something happens to you and your finger, um, falls off, you can't stick the detached digit onto the device and expect to gain access, the company says. The system relies on both a fingerprint scanner and a thermal sensor, “so that the finger alone, detached from the body, will still not give access to the memory stick’s contents," Victorinox said. TG Daily writes:

It's also been made tamper-proof. Any attempt to forcibly open it triggers a self-destruct mechanism that irrevocably burns its CPU and memory chip.

The company is so confident about its product, that it held a "Crack the Code" competition, where it dared contestants to breach the security of the knife. Apparently, 45 participants tried and failed. “We were so confident in the design and development of these devices, we were willing to put $100,000 on it,” Victorinox Swiss Army President, Rick Taggart, stated. “The fact that no one was able to crack the code really demonstrates the unparalleled security of these new products.” The company is reportedly working on another version of the device that will print out of the memory stick's contents on e-paper, writes TG Daily. Related Content: Discoblog: For a High-Tech Easter Egg Hunt, Let GPS Be Your Guide 80beats:First Europeans Mastered the “Stone Age Swiss Army Knife” Early On Image: Victorinox