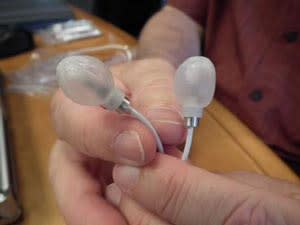 What’s the News: A new type of ear bud hacks the ear’s reflexes, reducing its natural damping so you don’t have turn the volume up so high to get your jam on. It also cuts down on all that unsightly “leathering” on your eardrum... How the Heck:

, aren’t on the market yet, and Asius is in negotiations for licensing the technology, so it will be a while yet before these little inflato-phones are available. In the meantime, check out the full review

of the tech at Sound and Vision. Image credit: Dan Bracaglia (via PopSci