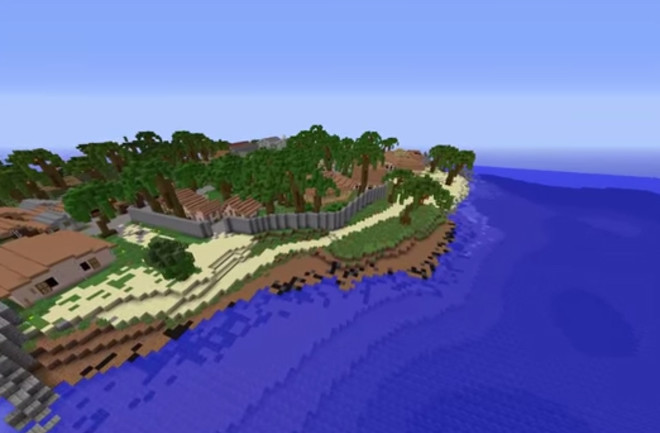 Haiti's Les Cayes waterfront as replicated in Minecraft. (Credit: United Nations Human Settlements Programme) For the most part, video games are simply another form of entertainment like movies, television and books; rarely will a video game serve a purpose other than to provide a leisurely pastime. But Minecraft is breaking that mold. The critically acclaimed video game is now democratizing the planning and design of run-down public spaces around the world. Minecraft is an open-ended game that allows players to construct anything they can imagine using textured cubes as their building material. Mojang, the game’s creators, partnered with the United Nations Human Settlements Programme (UN-Habitat)in 2012 to kickstart the “Block by Block” initiative, which encourages people to reimagine their communities by designing plans using the Minecraft platform.

Urban public spaces, such as the Place de la Paix in Les Cayes, Haiti, are accurately recreated in blocky 3-D form in the game. Then, community members young and old grab a computer mouse and start building the changes they want to see. Their models are given to architects and presented to local governing bodies for consideration. "In Haiti, we had a group of fishermen who couldn't read, couldn't write and had never used a computer, design a plan for Place de la Paix," Pontus Westerberg, Digital Project Manager for UN-Habitat, told Mashable. "They built a sea wall to prevent the area from flooding, and added public toilets. These models really let them visualize the changes they want to see in that space." By 2016, 300 areas UN-Habitat plans to remodel will be recreated in Minecraft to let local residents’ creativity take hold. The video below illustrates how designers replicated the Les Cayes waterfront in Minecraft.