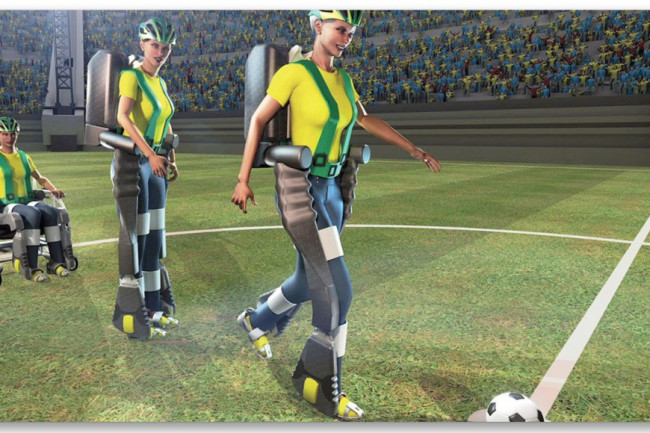 This artist's rendering illustrates the concept behind the Walk Again Project: enabling a paralyzed person to make the first kick of the FIFA 2014 World Cup football championship with the aid of a brain-controlled robotic exoskeleton. (Credit: Walk Again Project)

There will be thousands of kicks on the pitches of Brazil before one country emerges as the champion of the World Cup. But even if you counted every kick, the first kick is sure to stick out as the most significant. During the opening ceremonies in Sao Paulo tomorrow, an unidentified Brazilian, paralyzed from the waist down, will don a first-of-its-kind, mind-controlled exoskeleton to stand up, take a few steps and kick a soccer ball to officially start the quadrennial competition.

Thursday’s kick is the culmination of over 30 years of research combining the brainpower of 156 international scientists led by Miguel Nicolelis of Duke University. Eight patients, men and women between the ages of 20 and 40, have for months been training with the exoskeleton. The ceremony represents an important — but far from final — milestone in scientists' quest to make this technology widely available.

The machine is controlled by the user's brain. When we wave our hands or take a few steps, our brains fire signals through specific neural pathways. To walk with the exoskeleton, a user wears a skullcap with electrodes that record brain impulses specific to motion and sends them to a computer in a backpack; the computer then converts those signals into commands that tell the exoskeleton how to move.

The machine also provides feedback back to the brain. An artificial skin fitted to the feet of the exoskeleton will command tiny motors to vibrate against the user’s arms with each step, giving the sensation of touching the ground.

Nicolelis started the long road to this milestone in 1984 when he wrote his doctoral thesis on neural connection in muscular control, according to Discovery. He had the idea to build the suit in 2002 when scientists were beginning to engineer robotic exoskeletons. On April 24 of this year, a paralyzed user took the first steps in the suit.

"In 2009, after we learned Brazil was hosting the World Cup, they asked me for ideas to show Brazil in a different way than the world usually sees it. That's when I suggested doing a scientific demonstration to teach people that Brazil is investing and has human potential to do things beyond football," Nicolelis told the AFP.

Check out the video below to see a demonstration of how the exoskeleton will work on Thursday.