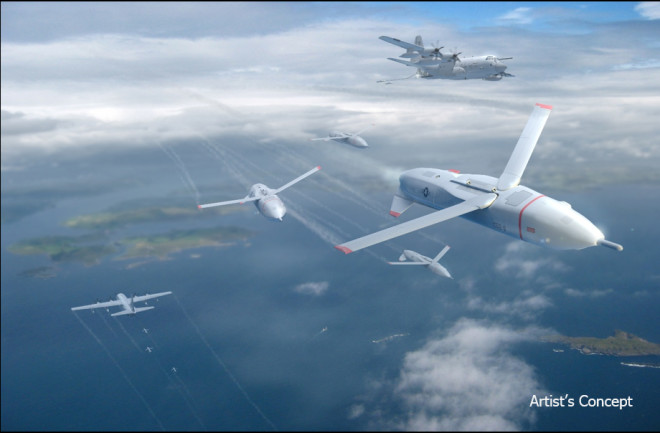 Concept art shows how a manned mothership aircraft could deploy swarms of military drones. Credit: DARPA Anyone with a fear of flying robots and giant claws may not want to hear what the maker of the U.S. military's Predator drone has planned for the future. The military contractor General Atomics is working on transforming a huge cargo aircraft into a drone mothership that uses a mechanical arm to grab returning drones in midair. The drone mothership claw is part of a General Atomics proposal for the U.S. military's "Gremlins" program that envisions manned aircraft deploying swarms of small drones for scouting missions. The program specifications laid out by the U.S. Defense Advanced Research Projects Agency (DARPA) call for enabling a C-130 transport aircraft to launch drones capable of carrying 60 pounds of payload on a 600 mile roundtrip journey, according to Breaking Defense. The drone must have enough fuel to also spend an hour hanging around above a target area. News of General Atomic's plan for a drone mothership mechanical arm came from a Breaking Defense interview with Chris Pehrson, General Atomics VP for Strategic Development, during the Air Force Association's Air, Space & Cyber Conference held from Sept. 19-21. Apparently Pehrson compared the action of the arm grabbing a drone as "almost like a Transformer-type thing." The U.S. military has been bullish on the futuristic idea of using drone swarms for a while. A drone mothership aircraft with the ability to launch and retrieve such swarms could scout a much wider area with less danger to the human crew aboard the mothership. But this gets tricky when DARPA wants the mothership to be able to retrieve the drones in midair. Certain systems such as Insitu ScanEagle have been designed to allow ships at sea to recover drones. In the ScanEagle's case, the returning drone catches onto a cable strung vertically on the side of the ship. But retrieving a drone from a moving ship is considerably less difficult than retrieving a drone in midair from an aircraft. https://www.youtube.com/watch?v=NY1Y9LBATHo A more relevant example may come from the aerial refueling demonstrations between the Northrop Grumman X-47B drone and a manned tanker aircraft. That required the X-47B to match speeds and nuzzle up carefully to the tanker aircraft's refueling arm. https://www.youtube.com/watch?v=orTsIRPT0Ts But the General Atomics demonstration with small drones may face greater challenges docking with a C-130 mothership's mechanical arm because of the turbulence from the much larger aircraft. So it remains to be seen whether the U.S. military's future drone mothership will deploy the claw or use other methods to retrieve the swarms of tiny gremlin drones.