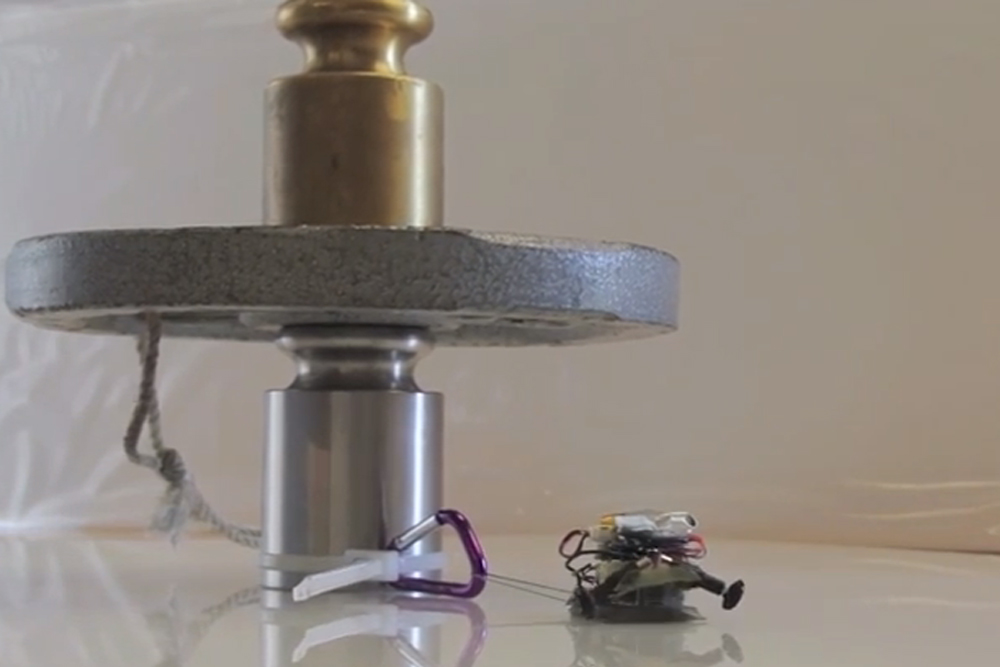 Every tug-of-war champion knows one thing: The power to pull lies not in your arms, but in planting your two feet firmly in the dirt for leverage. Engineers at Stanford University put this basic tug-of-war principle into practice when they designed tiny robots, which they've called MicroTugs, that can drag objects hundreds of times their weight. A 9-gram MicroTug, for example, can pull a 2.2-pound load vertically up glass. That’s equivalent to a human climbing a skyscraper while carrying an elephant. The MicroTugs owe their pulling power to their sticky feet, which borrow a page from geckos’ evolutionary playbook.

Geckos are some of nature’s most adept climbers, and they can stick to slippery surfaces with ease. Their clinging power resides in microscopic, hair-like structures on their toes that employ what are called van der Waals forces – a weak force that draws molecules together. The gecko’s thousands of points of contact on each toe create a weak electromagnetic connection to the surface, allowing the animal to stick and unstick its feet with ease. Engineers covered their robots’ feet with tiny rubber spikes that emulated geckos’ feet. When MicroTugs plant their feet, the rubber spikes bend and strongly adhere to a surface. When the foot is lifted, the spikes straighten and the foot easily detaches. The military is using the same technique to give soldiers Spider-Man-like abilities.

MicroTugs’ super-strong base allows them to pack some serious power. The strongest model can pull 2,000 times its own weight — the equivalent of a human dragging a blue whale around the beach. A miniature bot that weighs just 20 milligrams and was assembled under a microscope can pull objects 25 times its weight.

The Power to Interact

There’s been one nagging problem with miniaturized robots: They’re too small to actually move objects in their world. Engineers, who will unveil MicroTugs next month at the International Conference on Robotics and Automation, believe their robots can overcome this fundamental roadblock. They believe larger and more powerful MicroTugs could find jobs lifting heavy loads in factories or construction sites. Other more specialized models could be used in rescue operations to, for example, deliver a ladder to a person trapped in a burning building.