Microbot Can Grab and Move Tiny Objects...Not to Mention Fly 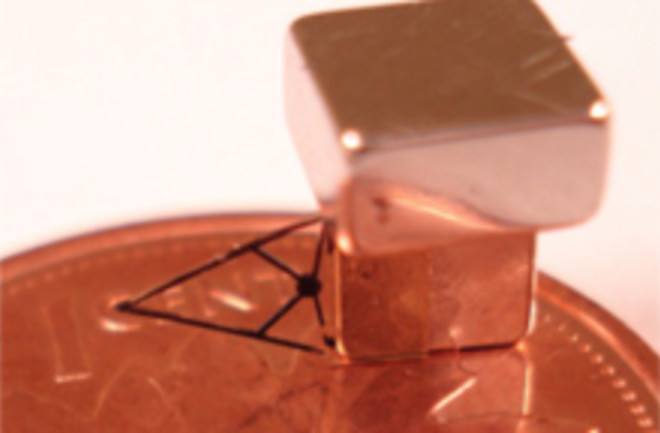 Teaching robots to walk was a piece of cake. But getting them to fly seemed much more difficult— until now. Say hello to the world's first flying microbot! Researchers at University of Waterloo built a prototype microrobot for maneuverability, powered it with a magnetic field, and used cameras and laser sensors to watch it hover softly over surfaces. Having the robot fly was a feat in and of itself, but engineering professor Behrad Khamesee tackled it knowing that the payoffs would be huge if the bot could help researchers move objects with more precision in the microscale environment. A computer tracks the robot’s every flutter as it fetches objects on command, grabbing them with its microgrippers. When an externally controlled laser beam is turned on, the microgrippers heat up and open, and when the laser is off, they cool down and close. In the absence of electronic wires to control its flight, an array of electromagnets below the robot powers it, so it can “float freely” in the air. No need to worry about privacy invasions—this robot wasn't built to spy. It's designed to handle what humans can't grasp in the microworld—so it could be useful for everything from microsurgery to cleaning rooms to investigating spaces contaminated by chemical spills. And with the robot still in research stage, don’t expect the little buzzer to fly on any walls near you in the near future. Watch it for yourself here. Related Content: DISCOVER: Microgrippers 80beats: Robot Can Walk On Sand DISCOVER: The Robot FarmImage: University of Waterloo