The first carbon nanotube computer, a long-sought alternative to silicon, is unveiled. 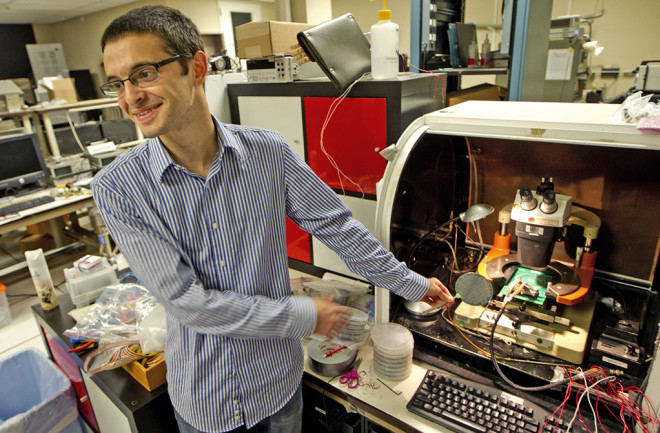 For decades, the computer chip industry has steadily improved devices’ performance by cramming ever more, ever tinier silicon transistors — the components that make up circuits — onto each chip. But the unreliability of silicon transistors smaller than about 10 nanometers means the pace of progress in silicon-based computing will soon slow.

The implications of that slowing could be dramatic, says Stanford University circuit designer Subhasish Mitra. Imagine, he says, an alternate reality where silicon hit its limits in 2001: In this world, smartphones don’t exist.

This wafer contains transistors made from carbon nanotubes, which offer an alternative to silicon-based computing. (Credit: Norbert von der Groeben/Stanford)

In September, Mitra and materials scientist Philip Wong demonstrated a long-sought alternative: the first carbon nanotube (CNT) computer, built from transistors made not from silicon, but from single-atom-thick straws of carbon, called carbon nanotubes. Carbon nanotubes are only about 1 or 2 nanometers in diameter, but their fundamental electronic properties make it possible to send strong signals using far smaller transistors than is possible with silicon.

Because CNT devices use about a tenth as much power as comparable silicon systems, they could one day offer substantial energy savings, too. But don’t expect to go weeks without recharging your phone anytime soon: Mitra and Wong’s CNT computer has only 178 transistors, compared with the billions of transistors that comprise today’s complex silicon circuits. And it can perform only simple tasks, like adding numbers. The Stanford researchers compare their achievement to the first silicon computers built in the early 1970s. “This is just the beginning,” Mitra says.

[This article originally appeared in print as "Test Tubes: A Computer Powered by Carbon."]