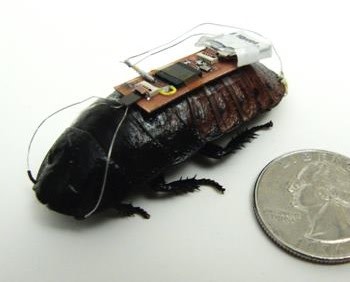 What has two antennae and receives radio signals? A cockroach, of course. Researchers from the iBionicS lab

at North Carolina State University have created a remote-control system to stimulate and steer cockroaches, they reported at the 34th Annual International Conference of the IEEE Engineering in Medicine & Biology Society last month. In this system, described in their paper

for the conference, they equip a Madagascar hissing cockroach with an electrical circuit board with wires connecting to the tips of the cockroach's antennae. They can then use a a joystick to send radio signals to the antennae in order to make the roach feel as though it has run into something and needs to turn away. A zap to the right antenna and the roach turns left; a zap to the left and it turns right. Remote-controlled insects are not new to engineering

in which electrodes were implanted into the brain and flight muscles. A shock to the optic lobe made the beetle take off. Stimulation of the flight muscles controlled steering. The research of both groups was funded by the Defense Advanced Research Projects Agency with the goal that these remote-controlled insects could go where humans cannot and aid in search-and-rescue or even spy missions. So if, years from now, you happen upon a roach or beetle wearing this little number, smile for the camera---before stomping.