Meet the Man Who Takes Pictures of Microbes

Zoom in on four decades of microscopy advances. 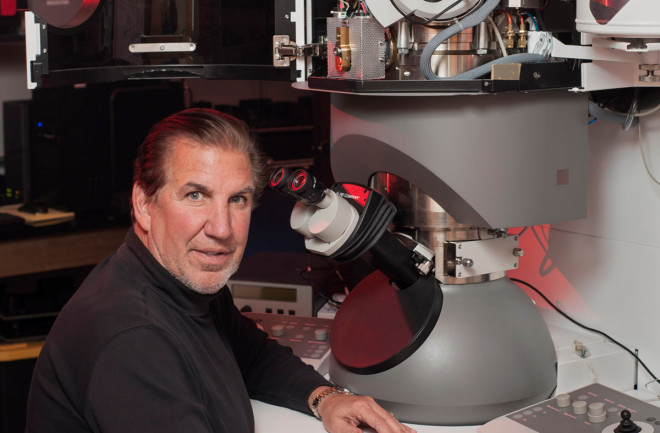 High school senior Thomas Deerinck didn’t expect his life to change when he walked into his science class one day in the mid-1970s. Local research scientist Betty Barbour had come to share her stunning images of the microscopic world. She was hoping to recruit students for her electron microscopy training program, eager for new helping hands. Deerinck promptly enrolled.

Forty years later, his award-winning photos have appeared on the covers of scientific journals. He’s also one of the most senior researchers at the National Center for Microscopy and Imaging Research in La Jolla, California, where he and his colleagues expand the boundaries of what a microscope can see and do.

But as his subjects have gotten smaller over the years, the large streams of data the photos produce need heavy-duty processing.

The jagged surface of a kidney stone. | Thomas Deerinck/NCMIR

Recent images of slices of a mouse brain require a supercomputer to assemble them into a 3D model of individual neurons and synapses. The image files are big, and the 3D models are even larger, so managing data is key. Deerinck has learned that when the microscopes can see individual atoms, his small world becomes almost impossibly huge.

Q: When you started in 1978, what was the state of microscopy?

A: Techniques and instruments were similar to those used for decades. We shot everything on film since there were few computers and no digital cameras.

Q: What have been the some of the breakthroughs in the last four decades?

A: In the mid-’80s, a special tool called a laser scanning confocal microscope revolutionized light microscopy by allowing us to image thick biological samples without out-of-focus blur. In the ’90s came green fluorescent protein, which makes different parts of living cells visible. We could do time-lapse imaging and see cell components interacting over time and in three dimensions. The next advance was electron tomography, where we use a high-energy beam of electrons to image a specimen from different vantage points to produce a 3D representation. It’s like a CT scan, but with thousands of times better resolution.

Q: What sort of microscopy challenges are you working on now?

A: To improve our ability to image the mesoscale — the middle scale between macro and micro — where you can photograph the structure of an organ, such as the brain, all the way down to the individual protein molecules. Currently, there’s no way to continuously image that entire range.

Q: So how will you get there?

A: It’s going to be a combination of robotics, deep-learning computer algorithms and just improvements in the actual microscopes. We try to bring all these things together: how you prepare your specimen, choosing the right platform to image it, optimizing the platform itself and then how you deal with the deluge of data.

Q: How do you make such technical photos that are also aesthetically appealing?

A: I have been married to an artist for 30 years, and she is always looking at my images and saying that I should come at it from a nature photography perspective. There should be an up and there should be a down, paying attention to color, contrast and composition. Many people don’t realize that the amazing beauty of nature extends to the microscopic world.