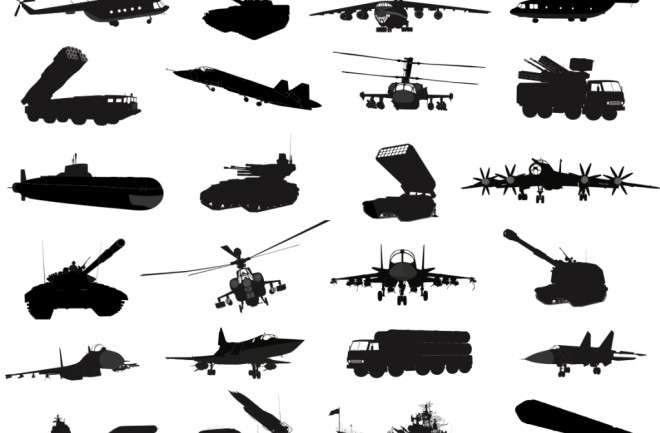 Credit: Shutterstock | Copyright: vadimmmus Not everyone fighting in the next world war will look like a soldier wearing an official military uniform. Some will work from computer consoles to infiltrate military networks. Others will become insurgents who strike swiftly at vulnerable targets and then vanish within the civilian population. Still more will carry military weapons and fight like trained warriors, but won't wear the national flag of any particular country. And a few may take advantage of the chaos of war to kill for their own purposes. That diverse characters in the novel "Ghost Fleet" represent a combination of old and new forces on the imagined battlefields of World War III. The novel represents a work of fiction based on the real-world expertise of coauthors Peter Singer, a strategist and senior fellow at the New America Foundation, and August Cole, a writer, analyst and former journalist who covered the defense industry for the Wall Street Journal. Singer and Cole wrote "Ghost Fleet" as a techno-thriller designed to help readers consider the technological and socioeconomic forces shaping the next world war between great powers such as the U.S., China and Russia. Many of the characters in "Ghost Fleet" were inspired by the real-life people interviewed by Singer and Cole, including a Chinese admiral who consistently quotes Sun Tzu's "The Art of War" and a U.S. Navy ship captain who tries to juggle his military duties and family life. But perhaps the most intriguing characters in the novel don't always answer to the traditional military chain of command. Nor do they always wear uniforms when striking at their enemies. (WARNING: Some spoilers for "Ghost Fleet" follow.)The Cyber Militia If World War III does break out, the first shots fired will likely take place in the relatively new battlefield of cyberspace. In "Ghost Fleet," a group of Chinese hackers lay the groundwork for their military's opening offensive salvoes by sneaking malware into crucial U.S. military and civilian networks. Such malicious pieces of code hidden on mobile devices and computer servers could help create a 3D virtual map of the Pentagon's interior. Or they could throw off the U.S. Global Positioning System (GPS) signals that so many U.S. military weapons and units depend upon. (Incidentally, Singer previously coauthored a non-fiction book titled "Cybersecurity and Cyberwar.") The main point of view for the Chinese hackers in "Ghost Fleet" comes from a teenage girl who represents an engineering student prodigy in one of the Chinese military's "Cyber-Militia" units. Countries such as China and Estonia already use civilian computer experts as "cyber militia" who can deploy their considerable skills in times of national need without formally being part of the military.

Credit: Shutterstock | Copyright: Duc Dao The U.S. Army Cyber Command aims to begin recruiting civilian experts for short-term military service, but the U.S. military has not yet committed to the idea of forming cyber militias. Still, "Ghost Fleet" doesn't count out the idea of the U.S. drawing upon its own informal networks of cyber experts working in Silicon Valley or elsewhere. Such experts will fight with keyboards, computer mice and their knowledge of coding and cybersecurity rather than traditional weapons. But their efforts in World War III could lead to some of the most devastating and lethal results in all other battlefields. The Insurgent She begins as an officer in the U.S. Marine Corps, but she transforms into a hardened insurgent leader once she finds herself behind enemy lines. "Ghost Fleet" imagines a homegrown insurgency springing up in occupied U.S. territory after a Chinese-Russian offensive finds some initial success. The U.S. insurgents use a set of hit-and-run tactics that will seem familiar to anyone who has paid attention to the post-9/11 era of U.S. and Coalition forces struggling to contain real-life insurgencies in Afghanistan and Iraq. "Ghost Fleet" is certainly not the first work of fiction to consider what happens when the "good guys" use less-than-savory insurgent tactics. The 1984 film "Red Dawn" imagined U.S. teens as insurgents fighting a Soviet and Communist occupation of the U.S. mainland. The rebooted TV series "Battlestar Galactica" that ran from 2004 until 2009 also features a story arc spanning several episodes where the protagonists of the series turn to suicide bombing and other insurgent tactics. The "Ghost Fleet" insurgents use a mix of military-grade weapons and off-the-shelf civilian technology to make life unpleasant for the occupiers. But the Marine officer also employs an increasingly cold-blooded strategy that risks the sacrifice of civilian bystanders in service of the greater military goal. Eventually, she even orders her fellow insurgents to always carry homemade mines in their backpacks. Such tactics might call to mind the real-life fighters of the Islamic State who wear explosive belts into battle. "She’s a Marine," Singer said. "For her, it’s the challenge of 'what are your responsibilities, to whom do you owe what in war?'" The Mercenaries They were known as "freelancers" in the days of sword, shield and lance. Today, they're most often known as mercenaries or private military contractors (PMCs). Many former soldiers and other ex-military types may find their way into private military companies and use their skills there for the promise of much higher paychecks. The U.S. and other countries have employed such private military contractors in roles such as guarding bases or convoys, escorting VIPs or sometimes directly supporting soldiers in combat. During the height of the Iraq War, there were just as many contractors as U.S. military personnel on the ground, although not all the contractors were involved in security or combat-related duties. The downside to the U.S. military's reliance on private military companies has been the fact that not all have held themselves to the best codes of conduct in war zones. Perhaps the most infamous example to date is the private military company known formerly as Blackwater. In April 2015, four former Blackwater contractors were given lengthy prison sentences for killing 14 unarmed Iraqis in a 2007 incident.

Credit: Shutterstock | Copyright: Militarist That incident and other cases of reckless or abusive behavior toward prisoners and civilians in Iraq arguably hurt the greater U.S. goal of winning "hearts and minds" and the "war of ideas," Singer noted in a 2007 policy paper for the Brookings Institute. In the same year, Singer went on to publish a non-fiction book titled "Corporate Warriors: The Rise of the Privatized Military Industry." Private military companies don't have the largest presence in the World War III scenario of the novel "Ghost Fleet." But Singer and Cole do cook up a fairly colorful scenario for a group of fictional characters belonging to the company formerly known as Blackwater. A small band of private military contractors ends up playing a crucial role in an unexpected battlefield—and they don't even need guns to do the job. The Serial Killer A woman described by a dismissive military leader as an "American beach babe" turns out to be one of the deadliest protagonists in the novel "Ghost Fleet". The serial killer hunts with simple, improvised and mostly sharp weapons in a decidedly up close and personal manner. She seeks out her victims in the midst of an occupied city and manages to hide her body count within the violence and chaos of an active insurgency. Meanwhile, she herself is hunted by a counterinsurgency expert who has computer-driven analytical tools and facial recognition technology at his disposal. "That storyline allows us to explore another side of insurgency and crime in the future," Singer said. "She’s in an urban zone and she’s being hunted. She has to figure out how to carry out her actions in a world of constant surveillance and Big Data." Singer and Cole drew inspiration from several fictional characters for their serial killer. For example, Singer pointed to "Dexter," the TV show that ran from 2006 to 2013 and depicted a serial killer hunting other killers. But one of the early reviewers of "Ghost Fleet" drew an unexpected real-world connection based on his own counterinsurgency experience in Iraq. That reviewer saw the "Ghost Fleet" serial killer as a fictional stand-in for Abu Musab al-Zarqawi, a former al Qaeda leader in Iraq who was responsible for numerous suicide bombings and gruesome executions of hostages. When the U.S. military analyzed Zarqawi's activities, it eventually came to the conclusion that Zarqawi was simply an "outright murderer taking advantage of the chaos of war" whose many activities were often driven by the "bloodlust of a killer" rather than making sense in terms of an insurgency's bigger goals, Singer said. Such real-life characters will undoubtedly surface again in any future war that gives them the cover and opportunity to kill.