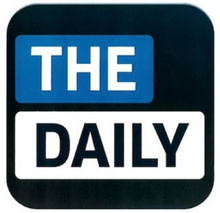 Rupert Murdoch—head of NewsCorp, the owner of Fox News, The Wall Street Journal, and the New York Post—has just launched The Daily, his "iPad newspaper" built from the ground up. So will people soon be reading original newspaper content on Apple's slick tablet, and will they being paying for it? Early reaction to The Daily is coming out, with some focusing particularly on what the product is not. From the tech blog Mashable:

Murdoch and his cohorts stressed that The Daily is, first and foremost, a newspaper. Most content will be released in a single update in the morning, but breaking news will be added throughout the day and could include, for instance, a live feed from Twitter to deliver updates, executive editor Jesse Angelo said. There are two problems with this strategy: one, that most iPad owners don’t use their iPads to access breaking news, and that The Daily, in its current iteration, isn’t really a newspaper; it’s a magazine. [Mashable]

The Daily—available by subscription for a buck a week or $40 for a year—boasts an opinion page, horoscopes, gossip items, and other telltale signs of Murdoch's love of the old-school newspaper. But, some reviewers note, its carousel layout—similar to iTunes—makes The Daily feel like several disconnected sections rather than a unified whole.

Open the app and you're presented with a carousel navigation much like "cover flow" in iTunes. I'd imagine the designers felt that was the simplest way to give a good overview of all the content, and subconsciously remind the user that this is an iTunes-style paid content environment – though you can't burn your existing digital publications and view them through the Daily. [The Guardian]

Truly, though, the medium is the message here, according to Jack Shafer at Slate

. He praises the return of Murdoch the gambler (rather than Murdoch the slithery tyrant) for throwing caution to the wind with The Daily.

Judging by the first issue, I'd say that The Dailyis more about establishing a new business model, with an effective pay wall, than embracing a new medium. For as long as the commercial Web has been around (I'd say 1995), Internet entrepreneurs have struggled to create frictionless toll roads that didn't require pulling out a Visa card every time you wanted to buy a product or something to read. By piggybacking on Apple's App Store, Murdoch's new publication makes it easy to pay to read. [Slate]

But publishers fear relying too much on Apple as a distributor and having to fork over large percentages of the profits. Murdoch, conceding that Apple's head start with the iPad will allow it to dominate the tablet world for the next couple of years at least, has already admitted

to agreeing to give Apple its standard cut of 30 percent of revenue. And some other publishers are just feeling left out, since Apple hasn't allowed them the option of selling publications via subscription.

With few exceptions — one being The Wall Street Journal, another News Corporation product — Apple has not allowed media companies to sell more than one issue at a time through its App Store. Apple’s vice president in charge of iTunes, Eddy Cue, who appeared with Mr. Murdoch at the Guggenheim on Wednesday, said Apple would have an announcement “very soon” regarding subscriptions for other news publications, but he did not say when or whether the arrangement that The Daily had would be extended to others. [The New York Times]

Murdoch, being Murdoch, has garnered plenty of comments and attention for the launch of his new baby. But his approach to building tablet journalism isn't the only one.

For example, the iPad-only Flipboard -- which seems to have recovered nicely from an overhyped launch -- combines the rich graphic design of print magazines with the easy navigation of a touch-screen device but also offers access to a wide variety of content from across the Web. And the subscription-based, advertising-free Ongo -- also available on the Web -- lets readers build their own news service from a selection of U.S. and British newspapers. [Washington Post]