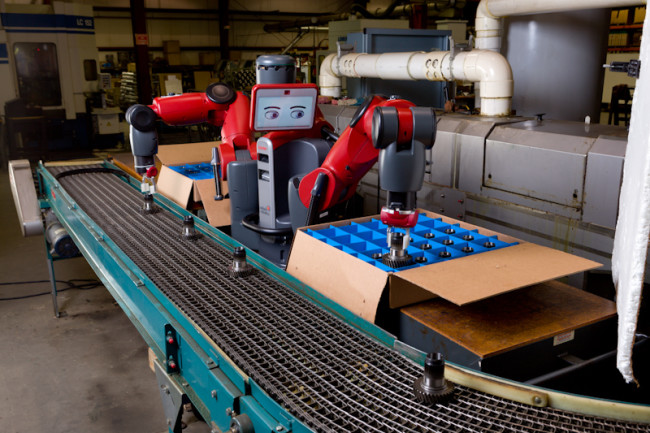 , a Boston-based start-up run by famous roboticist Rodney Brooks, has unveiled a manufacturing robot that can safely interact with humans, is easily programmable, and at $22,000

is pretty inexpensive, as industrial robots go. Brooks thinks that the robot, Baxter, which goes on sale in October, could revolutionize manufacturing by creating a new source of inexpensive factory labor. Industrial robots are fairly common in today's factories. Technology Review

reports that there are 1.1 million robots worldwide. But current models, such as those in the automotive industry, are kept behind glass walls and cages to protect their human coworkers. Baxter, in contrast, is meant to work safely with humans. It senses a person's approach and slows down. It has communicative eyes

that look where it's going and foretell its next moves

. Whereas other robots can take a day to program, factory workers can "train" Baxter by moving its arms and pushing a few buttons. Rethink has been testing the robot at small manufacturing companies around the country, to positive reviews

. Baxter, which could work for the equivalent of $4 an hour

, isn't designed to replace human workers wholesale. "The robot can’t do the full job of any one person, but it can do the simple cases of the simple tasks,” Brooks told

That frees human workers up to tackle the more complex tasks, right alongside the new robot coworker in their midst. Image courtesy of Rethink Robotics