Marriage Proposals By Drone Are Taking Off 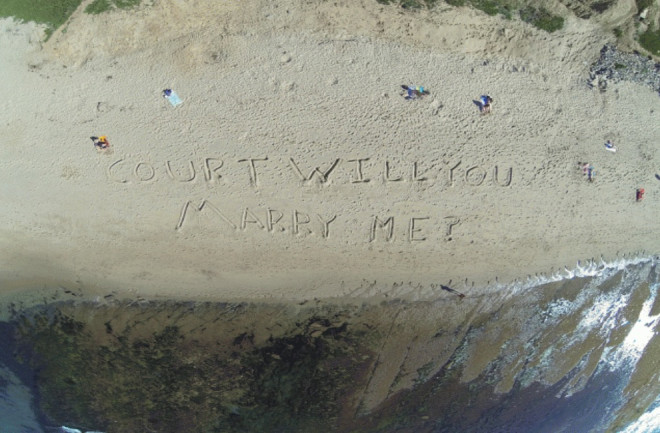 Credit: Screengrab You could say it was a match from up above. On Friday, a San Diego man proposed to his girlfriend in a way that’s so 21^st century: He had her put on first-person-view goggles while he flew his drone over a beach with the words “Court will you marry me?” written in the sand. Kevin Dillard, 27, and his now-fiancé Courtney Weigand, 25, had been dating seven years before Dillard’s unorthodox proposal, according to FOX 5 KSWB. In the video, you can see Courtney pull off the FPV goggles to discover Kevin assuming the traditional position: down on one knee with a glimmering ring outstretched.

Kevin and Courtney aren’t the first couple to express their love via drones. Chinese rock singer Wang Feng in February deployed a DJI Phantom to propose to his love Zhang Ziyi — who is best known for her role in Crouching Tiger Hidden Dragon. The drone delivered the proposal and the ring to a teary-eyed Ziyi, and she said yes.

And in December, a Boston couple got hitched after a drone “mysteriously” delivered a sack containing a wedding ring while the two were walking the beach. https://www.youtube.com/watch?v=bPUN75OcO0o So move aside, choreographed flash mobs — the future of viral proposals is going drone.