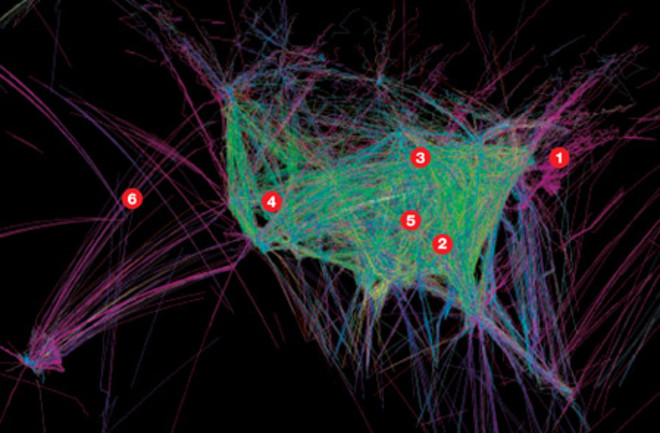 Colors represent different classes of plane sizes. Cargo carriers and 747s are blue and violet, while regional jets and puddle jumpers are green and yellow.(Image courtesy of Aaron Koblin.)

Recent UCLA graduate Aaron Koblin collected latitude, longitude, and altitude data of U.S. and Canadian flights from March 19, 2005, through the early morning of March 21, 2005. After parsing and plotting the enormous chunks of information, Koblin ended up with this depiction of 28 hours' worth of air traffic. In all, the number of flights recorded by the Federal Aviation Administration was more than 20,000.

2 ROUND 'EM UP Hartsfield-Jackson Atlanta International Airport herded 85,907,423 passengers through its gates in 2005. It also hosted 980,197 combined takeoffs and landings in 2005, knocking Chicago O'Hare International Airport, with 972,246 takeoffs and landings, into second place for the first time in at least a decade. For the record, Dallas/Fort Worth ranks as the third busiest airport.

O'Hare still takes the prize for the airport with the most delayed flights in the world, with 40.1 percent of its departures and 36.9 percent of its arrivals running late in November, the peak time for commercial air travel.

4 THE BLACK HOLE OF NEVADA

On average, according to the most recent U.S. census, less than one person per square mile lives in the Great Basin of Nevada. No passengers, no planes.

In 2005 Memphis International Airport carted almost 4 million tons of cargo and mail on its runways—the most cargo of any airport in the world, beating even Hong Kong at 3.78 million tons. But as China's economy grows, more of its exports pass through Anchorage International Airport, making its chilly tarmac the third busiest in the world for cargo.

These planes, which seem to arrive and depart a few hundred miles west of the California coast, apparently fare just fine on open ocean—there's no solid ground or runways here at all. Authorities offer no explanation beyond a data glitch. "It's highly unlikely," Koblin says, because devices on board report the data, "but it's possible."