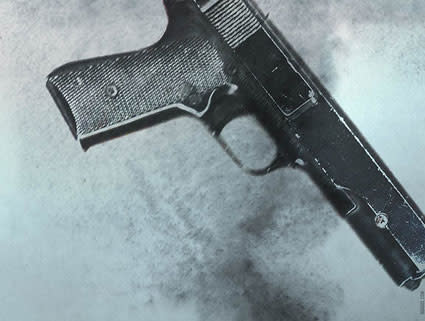 It seems like terrorists don't even need to think of crazy new shoe, underwear, or pancake bombs to get around the TSA, since airport security seems to have forgotten what normal weapons look like. Though they still won't let me bring four ounces of conditioner onto the plane. About a year ago, Houston businessman Farid Sief accidentally brought his loaded Glock on a flight from Houston's Bush Intercontinental Airport. The loaded gun, which Seif carries for protection, was tucked away in his laptop case, and should have been clearly visible since he had to take his laptop out of the bag, which was practically empty.

Seif was shocked when he realized halfway through his flight that the gun was still in his bag. He reported it as soon as he landed. Not that we haven't seen this before with things like six-inch hunting knives

, but aren't x-ray machines put in place specifically to detect bulky chunks of metal like guns? The scary part is that a TSA spokesperson told ABC news

that this isn't an uncommon lapse of security:

Authorities tell ABC News the incident is not uncommon, but how often it occurs is a closely guarded government secret. Experts say every year since the September 11 attacks, federal agencies have conducted random, covert tests of airport security. A person briefed on the latest tests tells ABC News the failure rate approaches 70 percent at some major airports. Two weeks ago, TSA's new director said every test gun, bomb part or knife got past screeners at some airports. [ABC News]

The authorities told ABC that "remedial training" was provided to the screeners at Bush. AKA they said, "hey guys, this is what a gun looks like." As if this is somehow supposed to make us feel better, the ABC News story notes that the incident occurred before the controversial advanced screening

"pornoscanners" and pat down measures

were put into place. Good to know that you just need carry your gun or bomb in your bag instead of on your body to get around them. It's official: I'm never flying again. Related content: 80beats: TSA Changes Its Mind on Security Rules—for Pilots