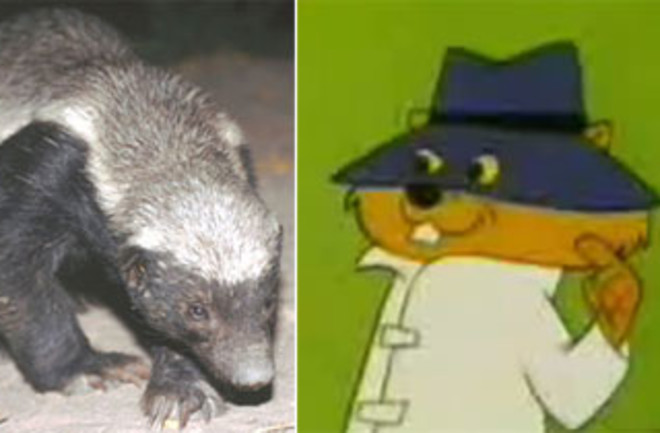 Iran's news service recently announced that security forces... how do I say this... "captured" 14 squirrels on the suspicion that they were spying on behalf of a Western power (read: the Great Satan). It was only a couple weeks ago that residents of Basra, Iraq, complained that British troops had released man-eating badgers to terrorize the city, which was already coping with militias that kill—if not eat—people. Judging by one admittedly unscientific report, the aggressive critters were something of a chimera: "My husband hurried to shoot it but it was as swift as a deer... It is the size of a dog but his head is like a monkey." Just try to picture that. Nevermind, look above at that picture of a honey badger, a more technical name for the "beast of Basra." The British admit it's feisty and perhaps not entirely attractive, but say it's indigenous to the area and making a comeback because of an eco-sensitive effort to re-flood the marshlands that Saddam disastrously drained. Back to the spy squirrels: Could the report be true? It does sound crazy at first—perhaps even crazier than the man-eating dog-monkey-deer-badger. But remember that during the Cold War, the CIA did carry out a project called Acoustic Kitty, in which they spent $20 million to train and surgically plant spy equipment in a cat. The first and only test run ended after five minutes because the program's eponymous agent got run over. In a report on NPR's All Things Considered, an old CIA spook denounced the report as "complete idiocy" (more idiotic than Acoustic Kitty?); an outside intelligence expert said squirrel spies could be "very cost-effective" and mentioned other CIA projects like the Dragonfly Insect-o-Hopper and a robot spy fish called Charlie; and a squirrel biologist questioned the Iranian report's claim that the squirrels weighed as much as 1.5 pounds—though it's unclear if he accounted for the weight of any spy equipment. Or maybe it wasn't the CIA at all but rather the British, they of the man-eating badgers. "I bet they were British squirrels, they are the most cunning," says a Persian fast-food vendor. PS: The music in the NPR piece comes from the 60s cartoon Secret Squirrel (picture above; watch intro). There's also a song and album called "Acoustic Kitty" (listen).