"Magic" Software Can Predict What CD You'll Be Buying 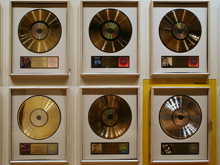 Musical acts have a similar epidemiology as the flu. Both start out as small, localized phenomena and then gain momentum with surprising speed, until everyone is hacking up the same virus and every radio station is blaring the same tune. Google caught on recently and created Flu Trends, which tracks the spread of the flu by charting user searches for flu-related words. And a team of Israeli researchers have come up with software that uses similar logic to predict the next big musical act. This "music trends" software tracks searches for songs or bands on Gnutella, a giant peer-to-peer file sharing network, and locates where the searches are generated. Since new bands often develop popularity through local gigs ("American Idol" is an exception), the software works because it can tracks momentum of grassroots movements. Based on the local ranking of the searches and how fast these rankings change, the software can predict the next breakout band. The system so far boasts a 15 to 30 percent success rate in picking out soon-to-be stars—pretty good in a business where most artists fade without ever making a name for themselves. In 2007, the software predicted the rise of Shop Boyz nine weeks before the group was signed with Universal Republic and 12 weeks before "Party Like a Rockstar" peaked at No. 2 on the Billboards. The new software, which appears to be unnamed, isn't the first to try to predict the next big hit. Some systems use formulas for melody, harmony, rhythm, and chord progression to predict musical hits, or formulas for themes and characters to predict the success of a movie. Others use collective intelligence to forecast the fate of books, the Oscars, or just about anything. Related Content: Discoblog: Since Sick People Surf the Web, Google Now Tracking Flu Trends