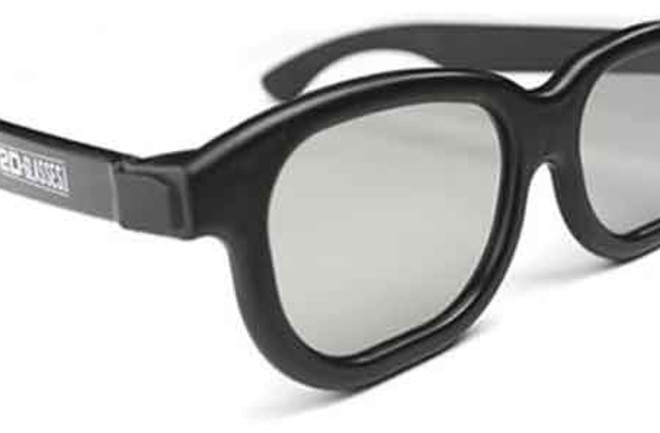 Eyestrain. Headaches. Nausea. For some people, this is all part of the 3D movie experience. And until now, your choice was to either suffer through 3D; find a cheaper, low-tech theater; or else forgo some new films altogether. But that was before one guy invented 2D Glasses, a pair of specs that converts projected 3D images into 2D (yup, you read that right). It's touted as a way of preventing eye strain while still enjoying a flick with your 3D-loving friends. The story starts at the end of 2010, when inventor Hank Green wanted to watch Tron Legacy in 3D with his wife. She confessed that 3D movies give her headaches; Green wanted to see the film in all three dimensions, but didn't wanted to see it alone, which sparked the idea of modifying 3D glasses into 2D glasses. As Green writes on his website, "after a lot of poking and twisting and gluing and cutting and cursing and sawing, I had created my first pair of 2D Glasses." He then went to see Voyage of the Dawn Treader in 3D with his wife, and she "could watch the movie in 2D, and even switch to 3D for the action scenes!" So how does this work? Most movie theaters nowadays use polarized glasses to trick your brain into seeing three dimensions: Two synchronized images with different polarizations are projected onto the movie screen, and each polarized lens on your 3D glasses lets only one of the images in. Because the images are projected at the same time, but show a view from slightly different locations, your brain combines the two images as one 3D image. With Green's 2D glasses, both lenses have the same polarization, which means that you're blocking out that second image that gives the illusion of depth, and you only see one, 2D image. 3D has now become 2D. Unfortunately, the glasses are only meant to work at most 3D movie theaters, which use passive (or polarized) glasses to convert two images into three dimensions. This means that you can't use the glasses to convert the images on your high-tech 3D televisions; most of these glasses are battery-powered active shutter glasses that "rapidly block one eye at a time so that each eye sees only the frame meant for it." And it also won't work with the old-timey red-and-blue 3D glasses, if you're using those, for some reason. After Green made the first pair for his wife, word quickly spread. He started getting the glasses professionally made and launched a company, aptly named 2D Glasses. And you can now order your own pair for $10, shipping included. Good luck, though, finagling your way into paying the 2D price for a 3D film. Related Content: 80beats: 3D TV Will Kick Off With World Cup Match This Summer 80beats: Holographic Video Device Could Bring Star Wars Tech to Your Living Room 80beats: Tablets, Smartphones, 3D, Oh My! The Gadget Buzz From CES Discoblog: Live From CES: Is The Next Big Thing 3D TV?