‘Logan’ Is a Western Wandering the Sci-Fi Frontier 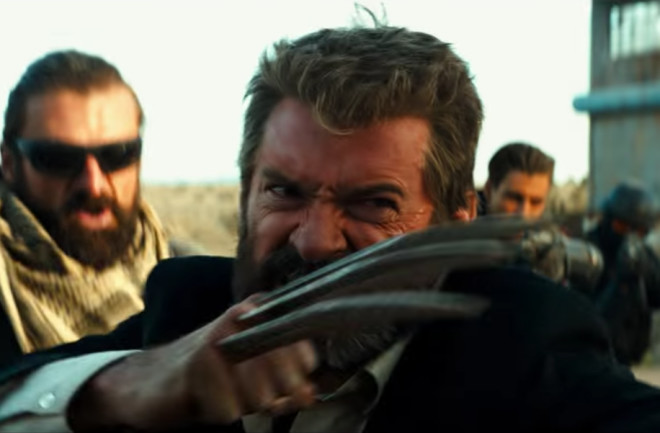 "We don't like strangers in these parts." Credit: 20th Century Fox The X-Men films have consistently shown their mutant superheroes as powerful but misunderstood outcasts living in the shadows. One of the loneliest and angriest of them all has been Wolverine: the seemingly ageless mutant played by Hugh Jackman whose superhuman healing powers and retractable metal claws enable him to literally tear through squads of gun-toting enemies. But the third and last film of the standalone Wolverine trilogy, titled "Logan" in a nod to the mutant's other nickname, finds a weary Logan fending off cyborg gunslingers and eking out an isolated life by the Texas-Mexico border. The film "Logan" hits fast forward on Hollywood's Western genre by setting its story in the year 2029. That enables plenty of futuristic twists on modern technologies: bionic arms, driverless trucks, quadcopter drone scouts and huge automated farm robots working in the genetically modified cornfields. All of those technologies ground the world of "Logan" with a sense of realism and familiarity because they already exist in some form. But there is nothing shiny or optimistic about the future in "Logan." Instead, technology represents a dehumanizing force that leaves ordinary people to struggle on the edges of society and empowers amoral corporations to operate with impunity. It's a harsh world that should prove instantly recognizable to fans of the old Westerns. "Logan" does much to invoke the tropes of classic Westerns such as "The Magnificent Seven" and "Once Upon a Time in the West." There are desperate Mexicans seeking aid from reluctant heroes and ruthless businessmen employing mercenary bands of gunslingers. Men engage in potentially deadly struggles over basic resources such as water. "Logan" even has a chase scene near a moving train, except that the heroes and villains ride in cars and trucks instead of on horseback.

In the 2017 film "Logan," the mutant superhero Wolverine faces off against enemies such as the mercenary cyborgs called The Reavers. Credit: 20th Century Fox The most intentional callout to the Western genre in "Logan" goes to the 1953 film "Shane." Several characters spend time watching key scenes from "Shane" in a hotel room while on the run. Like "Logan," the film "Shane" takes its title from the name of its protagonist. Like Wolverine, Shane is a warrior weary of killing who gets drawn back to violence in service of defending good people against ruthless business interests and their guns for hire. Each faces slightly different shades of villainy: the bad guys of "Logan" recruit cyborg mercenaries to hunt for escaped mutants instead of getting gunslingers to drive settlers out of their homes. The character of Wolverine—a mutant transformed into a living weapon by military experiments—has always been a kindred spirit to the Western genre's pantheon of talented killers who become reluctant heroes. The 1968 Spaghetti Western "Once Upon a Time in the West" has the mysterious harmonica-playing gunslinger "Harmonica" and the bandit leader Cheyenne. The 1960 film "The Magnificent Seven" features seven gunmen who band together to defend a Mexican village from bandits; a remake of the 1954 Japanese film "Seven Samurai" with a similar plot. (Logan would understand the spiritual connection between the West's reluctant gunslinger heroes and the East's reluctant ronin heroes given his own Japan adventures in the 2013 film "The Wolverine.") The film "Logan" even shows the ending of "Shane" where the titular character of that 1953 Western tells a young boy: "Joey, there's no living with... with a killing. There's no going back from one. Right or wrong, it's a brand. A brand sticks." The character Logan would have instantly recognized the meaning behind those words if he had been paying attention. https://www.youtube.com/watch?v=Div0iP65aZo None of the surviving heroes in those classic Westerns truly enjoy a happy ride into the sunset. But they do all seem to recognize themselves as relics of a dying era. Their individual stories reflect the larger narrative of the Wild Wild West giving way to civilization marching in lockstep with technological progress. The survivors of both "The Magnificent Seven" and its "Seven Samurai" inspiration talk about how only the farmers win in the end. "Once Upon a Time in the West" ends with the gunslinger Harmonica riding off with his fallen friend as railroad workers lay tracks ahead of a puffing work train. As for "Shane," the protagonist tells the villain "your kind of days are over" and acknowledges the same for himself as a gunfighter. He rides off wounded from the final showdown with some parting words for the boy who idolizes him: "Now you run on home to your mother, and tell her... tell her everything's all right. And there aren't any more guns in the valley." If you have already seen "Logan," you can draw your own conclusions about how closely the superhero film embraces the bittersweet endings of those classic Westerns. But "Logan" seems ambivalent at best about technological progress given its depiction of automated farming machines and self-driving truckloads leaving humans in the dust. The film ultimately favors a less radical but more familiar idea: family bonds and not futuristic machines will prove the saving grace of humanity. That philosophy may hold true even for a jaded mutant with adamantium claws.