Live from the FIRST Regional Competition: Some Go To Atlanta, Some Go Home

On Sunday at New York’s Javits Center, hundreds of teens gathered to compete in the finals of the FIRST Robotics Competition regionals. The winners will go on to the National Competition in Atlanta—for the rest, this competition was the end of the assembly line. On the track, the competition was fierce and students eyed each others' handiwork warily. But behind the scenes in the pit, where goggle-clad kids wielded screwdrivers and tinkered with their machines, the students shared their knowledge with each other, with experienced groups often lending a hand to first-timers. The Capri-Sun flowed freely. 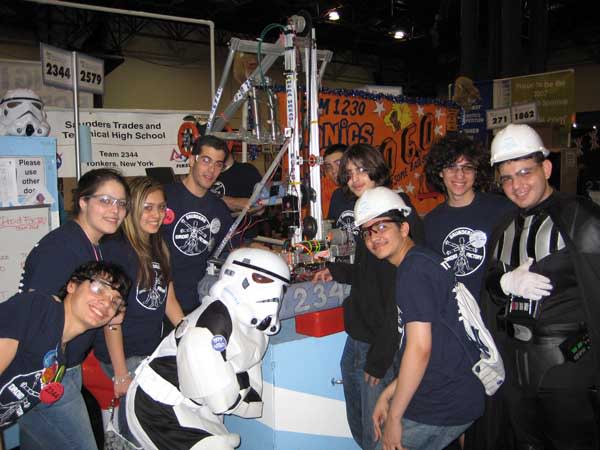 Joseph Messina, of Saunders Trades and Technical High School in Brooklyn, was a little nervous after the practice rounds. “Gravity,” he said, was his team’s main problem—just seconds into the round, their robot fell over and lay helpless on the track floor until time ran out. But the team brought their robot, Linda, back into the pit and fixed her up for the final competition. The work paid off: The Saunders team came back to win the highest rank of any team competing for the first time, and won the Rookie All-Star award, which means they will move on to the national competition in Atlanta. “We’re going to Georgia!” said Messina, who attributes the team’s success to the fact that they involved so many students in the project. The team recruited students from all over the school—they got carpentry students to make the crate for Linda, and fashion students to help analyze the material used for the fabric. 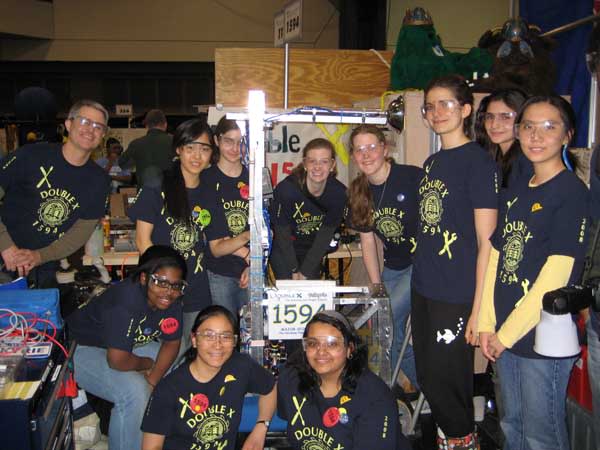 Another success was the all-girls team from Brearley and Chapin High Schools in Manhattan, who reached their goal of making it into the quarter-final round this year. Co-captain Kristen Kagetsu, a senior who plans to attend MIT next year and major in mechanical engineering, says their bot is named Valkyrie, after the daughter of the Norse god Odin. “She was a strong woman,” Kagetsu says, and an appropriate namesake—the Brearley-Chapin team was the first all-girls team in the competition. Freshman Laura Slade, who also sings in the chorus and plays flute in the orchestra, says that although the robotics competition requires a huge time commitment—the team toiled for hours every day after school, but the fun of going to competitions makes it worth it. The girls focused their efforts this year on making sure Valkyrie would drive straight and not crash into the walls of the track during the competition, which is a problem for many of the robots. Although the team was knocked out after the quarter-finals, Slade proclaimed that “we will be back next year. 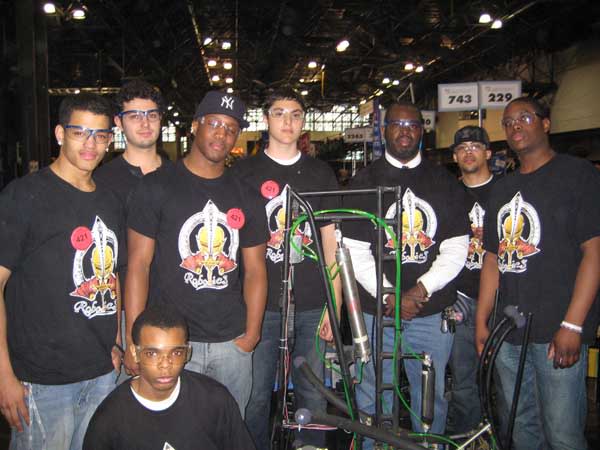 The team from Alfred E. Smith High School in the Bronx brought their Warriorbot with better welding and upgraded pneumatics from last year—and hopes of winning first place. They had scoured sports equipment stores looking for the best material to use at the ends of their robots arms—they wanted to be sure the robot wouldn’t lose its grip during the competition. “We actually finished working two weeks early,” says senior Nicholas Hunter. They used the extra time to test their robot in the school’s carpentry shop—and even took a few practice runs down the hallways. The practice runs also gave them a chance to recruit new members for the robotics club, says captain Shamar Wright, a senior. “We’re trying to get kids to see this isn’t nerdy,” says Hunter, who also plays on the school football’s team. Although Warriorbot did well during the practice round and scored 12 points, the team didn’t reach their goal of winning the competition. “We’re disappointed, but we’ll be back,” says Hunter.