Live from CES: Products You Pretend Are For Your Kids

WowWee has made a name for itself with toys that capture the imagination, make use of smart combinations of technology and are often equally fun for kids and adults (their droll-for-adults Panda is one outlier that comes to mind). At CES this year, WowWee brought what has become a grand assortment of toys that fly through the air (although airspace in CES was restricted due to a few too many crashes with bystanders), dance on tables, spy remotely, and spin for you after you’ve had a hard day at work. There are mostly incremental additions this year and no category-changing reveal, but there are definitely WowWee products to look forward to in 2008: Mr. Personality The first thing you can’t-help-but notice from Mr. Personality is his dynamic, albeit strange mannerisms read on his roughly 2-inch LCD screen face. The WowWee representative who introduced me to Mr. Personality said he was programmed to be a mix of Jim Carrey and Davis Cross—meets Ren and Stimpy’s cartoonist, I would add. 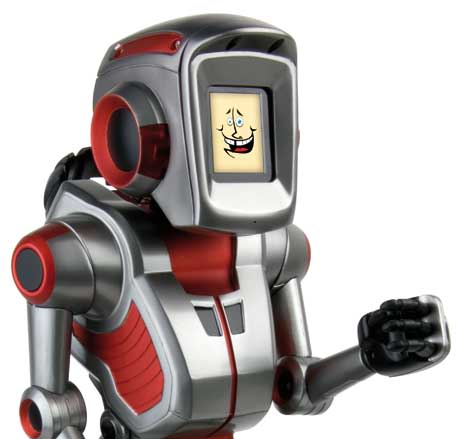 Mr. Personality is a complicated robot. Sure, you can do the easy humorous stuff like make him dizzy, irritate him with continual movement and ask him questions to which he often gives the same response. But it’s the subtle things about Mr. Personality that make him a very different toy-bot. Tell him goodbye before you go to work, stay out until midnight and he’ll ask you where the heck you were, Stay out until 9 and he might be sympathetic to your being run down by your boss. Furthermore, he tells actually nearly funny (mostly strange) jokes, is unpredictably quirky and, when you’re tired of him, he has other personalities you can download online. Sure, this is a strange product but it seems geared to one of the more difficult age gaps in products—and it might succeed as a toy that appeals to both teenagers and adults. Rovio One non-reveal from WowWee, who mentioned this as-of-yet released spy bot a few months back is Rovio, a three-wheeled bot that is controlled from a Web browser any distance away which broadcasts video from the Web camera on its remotely adjustable head. Turn the robot and you can check up on, well, whatever is in the room. Its best trick: When the robot’s batteries start running low, it plugs itself into the wall. 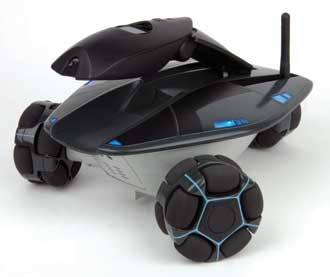 Frankly, this product is a glorified remote-controlled car with a Web cam, but the all-in-one package, accessible software and elatively fast maneuverability even from hundreds of miles away makes for an interesting product with many possible offshoots. Bladestar If you enjoyed WowWee’s dragonfly ornithopter last year, you probably didn’t like it for its grace in the air, its maneuverability, or its ability to hit your friends (when you were trying, at least)—it didn't have any of that. The dragonfly was fun, but certainly not agile. The Bladestar, on the other hand, promises to be not only extraordinarily maneuverable, but also to serve at its own damage control—with a few IR sensors, it can avoid walls, hands, and pesky people. The Bladestar can fly 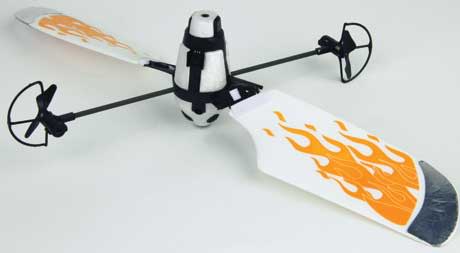 on autopilot until you command it to land. Better still, two Bladestars can go at it in an IR dogfight—get in range, fire from the remote, and your opponent is disabled.