CES is the world’s largest consumer electronics showcase, boasting products from a multitude of countries and all the big names in electronics (Apple not included—they have their own Macworld Expo to follow). It is here that company’s unveil such big products as the world’s largest HD television, cell phones, phones, and more phones; and where industry trends reveal themselves—giving the public a unique insight as to what products and technologies the companies are sinking their money into—and dreaming of. Before writing about the big gadgets, trends, toys, and delving into the many fun products, I thought to look into those technologies that CES deems off our radar. It seems only appropriate to kick off my time here at CES with the lecture “Top 10 Technologies You’ve Never Heard Of.” Here, a panel of lead insiders including Texas instruments and iRobot are giving us their insights on what the future will look like and the technology now that will bring us there. This panel gave a number of insightful—and hopeful—projections on the most exciting places technology is going: 1. Getting rid of wires: Wireless HD (millimeter-wave wireless) gets lauded across the panel. It doesn’t get rid of all wires but advances wireless tech for communication—with speeds up to10 times faster than any today, sending 4 GB/second (for now), making for full quality, compressed, hi-res video. This technology also creates focused beams rather than the usual scattershot wireless signals, allowing for more devices, more users, and less interference. Expect the tech soon: the wireless HD consortium has come together to present a standardized format for adopters of wireless HD 1.0, which includes big names like Panasonic, Sony, Intel, Samsung, and Toshiba. 2. Getting rid of plugs: Wireless isn’t just for communication—it also brings us power. Batteries are the preferred energy for a wireless mobile society, with li-ion’s the modern standard, but, points out a gentleman from Texas Instruments, there have been only a handful of battery technologies in the last two centuries of development. Certainly low power can be—and is being—made wireless. Today, the simplest course is RF power, but, there are still so many “wireless” ways to get power that have gone untapped, like solar power, heat differentials, and movement. The panel agrees on one thing: We’re not very efficient right now and we’re going to need some great breakthroughs in power-gathering capability. While the industry is looking towards new sources of power, the panel members agree they are also becoming cognizant of the efficient use of energy. So the industry hopes to be more judicious with software, screen uses, etc., across the whole design; you have to be judicious with the power you have unless you want a really long power cord. 3. Robots and recognition: Here’s one that isn’t far from an Orwellian vision: iRobot suggests that in the near future, digital IDs will be in everything, from your water bottle to your shoes. One of the biggest robotic challenges is identifying objects and knowing where they are. Instead of complicated processes that mimic humans, ID tags could be placed in all sorts of products (RFIDs are quite small) and robots would then just read a code to tell them, “water,” “dog,” or “enemy human: attack.” 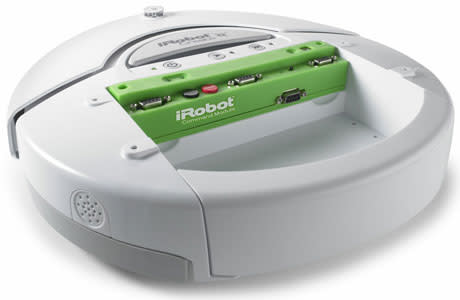 4. Robotic modularity: For the electronics and robotics consumer, customization is critical. There are usually two kinds of customization/personalization: change coming from a small subset of hackers, and that from products that were built for customization. Here’s an interesting idea: If you create open-source products that require moderate-to-high-level hackability, they might just bring you better products. That’s what iRobot has in mind, at least with their Robot “Bake” concept and the Roomba “Create” (pictured). These concepts have drawn DIY roboticists to iRobot and made for not only every variation of the Roomba imaginable, but a new product—a robot that cleans your gutters. How’s that for R&D? Not a part-time coder? Worry not, says this panel. If robotics are really on the trajectory that the personal computer was (as Bill Gates suggested in his keynote earlier), it will get easier for your average home and not just for, say a PhD student in robotics at CMU. 5. Macro, micro, nano, quantum, and processing power: The panel seems to believe that quantum computing is going to move to the fore, and is nearer than maybe we think, about to bring us “unbelievable new technology.” Of course, no timeline is given for a quantum explosion and no one believes that quantum computing alone will make the future. The panelist from Texas instruments asks if optical and quantum technologies will replace silicon—all agree it will take a combination of new tech in conjunction with silicon materials. No one in the panel seems to have a grasp as to what nanotechnology and quantum technology’s bigger implications are. As one panel member says, “Who knows what we’ll come up with when there is no speed limit. It will be an interesting race between conventional technologies and these in the distant future.” 6. Visual future—holographs, TV screens, and displays in your mind: How about this for holograms: The most discussed technology in this category is displaying images on the retina. The general trend, this panel thinks, is getting visual screens closer to real life—actually part of the eye or in 3D, Gattaca-like holograms. The panel argues that we have come to see hearing aids, glasses, pacemakers, and wheelchairs as ordinary. We’ll soon see things like these integrated in the body: optical implants, cochlear implants, and, if William Gibson has anything to say about it, retractable metal fingernails. In general, says the panel, we’ll keep thinking beyond the surfaces we have now and soon we’ll no longer need television—that’s what projectors (demonstrated on stage by the 10 lumen 3M projector that is the size of a pen), holograms, lasers, and imaging chips are for. 7. Cars that drive themselves: “By 2020,” says a member of this panel, “our cars will be able to see perfectly. What will you do while you’re driving?” Automotive radar in many vehicles will be a big technology to aid the limits of visual technology for cars. The panel also hearkened back on the failed Highway of the Future initiative, saying that magnetic, infrared reflectors put in the road is still a feasible technology.