Live from CES: A Robot in Every Home—Microsoft’s High Hopes

The International Federation of Robotics says that 2005 sales of robotics reached $8.4 billion and are projected to expand annually by 40 percent. Sure, such projected growth is quite optimistic and based on hopes that the brewing consumer-robotics storm will hit its stride with affordable price-points, friendly user-interface, and crash-proof robots. If so, industry insiders hope, robotics could move to ubiquity, making for a future where a robot lives in every home. Microsoft has been trying to bring this idea to the fore with their software, Microsoft Robotics Studio, released a little over a year ago, which, Microsoft has hoped, would give the robotics industry a common language to be used by developers across the industry and at home. Tandy Trower, the General Manager of Microsoft’s Robotic Group is here at CES to speak about Microsoft’s vision of the robotics industry. On the surface their vision is a humble one, “Microsoft is not going to bring robotics to the world by itself,” says Trower, “We are providing a catalyst for the industry to jump-start itself.” So far, so good; there have been 150,000 downloads of this software, which is free for non-commercial users and a fairly affordable $399 for commercial licenses. But today, Trower is focusing on where he sees the robotics industry in the next few years; namely answering the question: Are people ready for this technology, and if so, how will it develop? People are most certainly ready, he thinks, and the market is emerging slowly, but will soon have an explosion in products at home and elsewhere. He, obviously, gives credence to Bill Gates' analogy between the robotics industry and the early PC industry. Robotics are just moving beyond their fledgling, supercomputer stage, and are ready to become personal computers in, oh, ten years. Trower then took a moment—a number of them, really—to flesh out the analogy: “Here are the similarities,” says Trower, between robotics and the PC. “The car you own right now was put together by expensive, proprietary robots [that are] run by professional operators.” This, he says, is like the computing industry in the 1970s. There is large equipment with high-paid professional operators. This is like robotics a few years back. But robotics is at the point computing was 33 years ago, in 1975 when the Altair 8800 came out. Sure it was a cumbersome computer, but it was still for the public. This technology soon lead to the Apple II, Radioshack Model 1, and other 8-bit processors. “Then the IBM PC changed the industry.” Still, says Trower, the early computers were just toys; fun for computer geeks with little real-world applicability. Sound like any industry today? The time is now, Trower argues, for robotics to move beyond personal entertainment. He believe the move begins with smarter appliances with more complicated sensing systems. Dishwashers adjust temperature, auto soap dispensers are commonplace, and something as simple as anti-lock brakes are totally taken for granted. These are applicable to robotics, which, packaged together with simple function toy robots like the Roomba, iRobot’s gutter cleaner, and LEGO Mindstorms, will become robots that are “PCs on wheels.” This next evolution (which Trower says is now in its first generation) of mobile information and communication bots include wheeled beings with navigational devices and rechargeable bases and which offer the ability to be platforms for more applications (i.e., are hackable). Microsoft’s example of such a robot is a Korean creation they are rolling around on their show-floor. The Yujin iRobiQ is a relatively unimpressive 12”-high rolling bot with a touchscreen, camera, microphone, wi-fi, speakers, and proximity sensors. iRobiQ is part of (maybe the poster child for) Microsoft Robotics Studio software. It’s cool, but you can make the same thing with a few hacks to iRobot's Roomba Create (see my last post), and it doesn’t give a sense that the Robotics Studio has made any great progress. 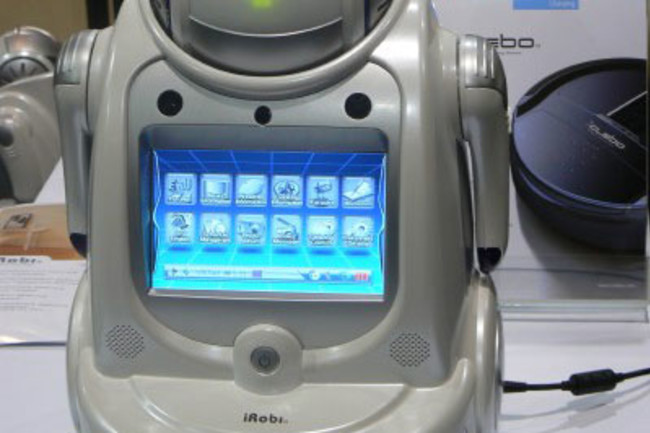 Where we will see progress is in the Robotics Studio’s physics-friendly CAD program. Sure, complicated, two-armed bots (the biggest challenge in robotics today) are being worked on with the Robotics Studio by researchers with money like the University of Massachusetts, Amherst’s, which has uBot-5, a bot that can throw balls and pick up cups with grace. But the DIY hacker doesn't usually have the money to buy the servos and hardware required for actual demonstrations. This is where the programs capability to render complex physics on the computer could be quite useful and where Trower believes many early robotics ideas will come from. Trower gives no real idea of where he thinks the next generation of robots will pop up. He hints that the people buying toys like LEGO Mindstorms and useful bots like the Roomba will be the one clamoring for all-in-one communications robot (Which he describes like he has a complicated version of iRobot's Rovia in mind). The one market he does call “the big market” is residential assisted care. With a growing elderly population and a decrease in human services, Trower says, there is no demographic that needs robots to help them with daily tasks more. Just what these robots will look like and what tasks they'll be able to take on, however, is a vision that Microsoft hopes is just around the corner.