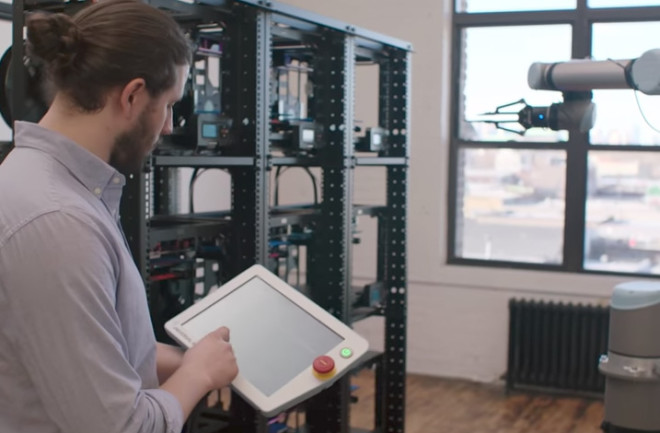 (Credit: Universal Robots) Robots toiling day and night assembling widgets and thingamabobs in pitch-black warehouses isn’t some mustache-twirling industrialist tycoon's fantasy. It’s here, it's the future of manufacturing, and it’s not just the multinational conglomerates that stand to benefit from the robot labor revolution. Main Street will, too. Voodoo Manufacturing, a small 3D printing farm in Brooklyn—OK, so not quite mom and pop "Main Street"— was running up against a problem every small business wants: They were growing too quickly to keep up. Voodoo prints designs, products and anything else on demand for their customers 24 hours a day, and they can get the job done within a day. “Harvesting” was one of the biggest logjams in their assembly process, which involves taking the finished product out of a printer and replenishing the printing plate for a new job. So the company invested in a small robotic arm, the UR10 from Universal Robots, and got on board the lights-out manufacturing bandwagon. The UR10 harvests Voodoo’s rack of 3D printers 24 hours a day, over and over again. It doesn’t need a break, it doesn’t come in late and it doesn’t even need the lights on. They just leave the thing running, and by automating this simple, yet labor-intensive task, Voodoo has tripled its output. They currently have 160 printers, and this solitary robot can tend to 100.

Lights-out manufacturing seems like an advantage accessible only to industrial giants. Fanuc, for example, is a global robotics company that owns production facilities where robots make more robots around the clock. Still, updating large-scale production lines with worker-bee bots is capital intensive for both large and mid-size manufacturers—if it's not done correctly, you lose the cost savings. The immediate future of lights-out manufacturing might be more accessible to the “little guys,” that only need one robot to make a huge difference. More robotics manufacturers are focusing on building co-bots, or small, nimble machines that can work collaboratively, and safely with humans. Universal Robot has rolled out the UR10, Swiss electrical engineering giant ABB is pushing into the space with its YuMi bot. Rethink Robotics has Baxter, and several more companies have their entrants to the space.

These robots can be trained on any number of repetitive tasks, and could free up a significant amount of bandwidth for startups with just a few employees. Rather than investing time in manual labor, the limited number of employees can focus on other aspects of the business to grow. Voodoo set up its bot for roughly $50,000, and chief product officer Jonathan Schwartz says the system will have paid for itself in 6 months. Given the economics, small-scale firms like Plastic Components Inc. in Wisconsin are rolling out 24/7 manufacturing capabilities. The collaborative robots sector is set to grow tenfold by 2020, as firms look to cut costs and also assign dangerous production tasks to robots.